To help all the musicians in the world get into the Christmas spirit Native Instruments have released a free instrument with a festive 3D interface.

Kinetic Treats is a new Christmassy virtual instrument from Native Instruments that creates sounds “based on the timeless sounds of vintage children’s toys”. Kinetic Treats’ interface features two figures, a toy ballerina and a small robot whose movement affects the sounds in various ways.

The tiny ballerina atop this music box and her creaking tin companion may seem a mismatched pair, but dancing together they conjure up a world of twisted, evolving sounds.

The brainchild of sonic craftsman Jeremiah Savage, Kinetic Treats is a unique Kontakt instrument based on the timeless sounds of vintage children’s toys. As the two figures move around the room, the sound morphs and changes – all the way from delicate and airy, to dark and eerie.

Many of the controls included with Kinetic Treats take the form of different toys for an instrument that is more about fun than anything else. There are also hidden controls and functions within some of the toys, or that can be accessed by combining toys. Native Instruments revealed some of Kinetic Treats’ secrets but said you’ll have to uncover most of them yourself. 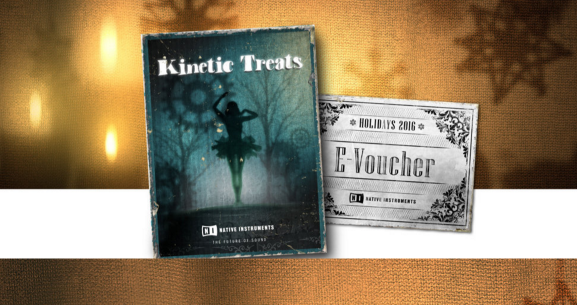 In case a virtual instrument based on classic children’s toys doesn’t appeal to you then you also get a £22.00 E-Voucher to spend on Native Instruments products when you download Kinetic Treats. Kinetic Treats is free until January 4th when the £22 e-voucher also expires.