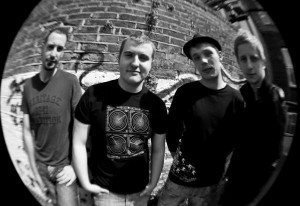 For just £3.00 you could be the proud owner of the following; these novelty condoms, this photo keyring of a giant and inflatable banana, this Gaelic phrasebook, or this hilarious fridge magnet.
Something £3.00 won’t afford you however, is Moriarti‘s new E.P, Bouverie Mews. This will cost you £3.16, a price that I’m entirely sure is not worth paying, unless what you really like is badly produced punk-pop, that is about 10 years too late to ride the crest of the punk-pop wave.

I’m not quite sure where to start with my criticism of Bouverie Mews. I suppose the most obvious offender is the record’s production, which really is mercilessly dreadful. It’s all so badly balanced and hard to decipher. Listening to this E.P is a bit like eating some very stodgy porridge with melted banana and honey thrown in; you can’t quite work out what flavour is coming from where, and you’d really prefer to throw the whole thing in the bin and have something else.

‘When I’m done’ –  the first hurdle we apparently aren’t allowed to crawl under and avoid – opens with that oldest cliche and material generator pop music has to offer; a falling bassline that resolves to the first note of the first verse. Jesus, why didn’t you just call it ‘My first song’ and have done with it? The lyrics describe absolutely nothing, are hard to follow and in no way memorable.
The song’s chorus returns to the falling bassline motif whilst the lyricist sings in the most forced English accent I’ve heard in some time.

The record’s real low point is track 3 ‘Snapshot’. Remember the TV show Britannia High (if not, google it). This song sounds how I imagine the rejected songs from the aforementioned show do. It opens with a bizarre ‘intimate’ vocal over a picked guitar and synth pad. This is for a short period not completely awful to listen to, but then 30 seconds or so in the full band is back with one of the most irritating power chord progressions I’ve ever heard. The singer (I can’t be bothered to find his name) then repeats the line “is it too much to give?” quite a lot.
The song ends on a massively unconvincing ‘rock’ riff before turning into game show theme tune.

The fourth and final song is actually not too bad. When I say not too bad, what I mean is that the first minute or so isn’t completely awful. There are some slightly more convincing riffs that make Moriarti seem slightly more convincing as a rock band.
The first time I heard this song I found myself on the floor with laughter after hearing the guitar solo attempted at around 1:40, and for this reason alone I’ve linked the track at the bottom of this review.

You might be thinking that I’ve quite unfairly attacked a band that have made a self produced, lo-fi record and are just trying to get noticed like all of the other struggling recording artists out there. Well, yes and no. They have released an E.P that they’re expecting people to buy at £3.16, which seems very steep for what is essentially a teenager’s demo, and a bad quality one at that.
I have no problem with lo-fi music, nor do I have a problem with pop-punk. Look at how brilliant Crackout or Mclusky were in the earlier days of their respective careers. The problem I have with Moriarti is that so little thought seems to have gone into any aspect of this record, especially the production. Oh, and the song writing is extremely poor too.
Yes, I have been harsh, maybe unnecessarily so, but this is so, so far from being anywhere near good enough to expect people to pay for, and the fact that they are expecting people to has enraged me.

If you’ve got something wrong with you and would like to buy this record, it can be purchased by clicking here. If you want to listen to the E.P for free (advised) you can hear it on their MySpace page.

If you would like to be reviewed then please get in touch; luke@routenote.com or on twitter @monkeyhotel

One Night At A Time by Moriarti