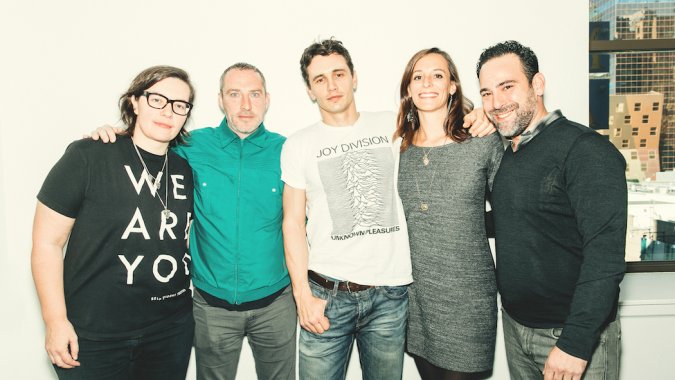 James Franco and multi-instrumentalist Tim O’keefe have just signed their band Daddy to Kobalt in a worldwide, multi-year deal that will entail a full-length album. The album, titled Let Me Get What I Want, is due for release next year along with a film of the same name.

Commenting on the deal the duo said: “We are really excited to partner with Kobalt on our upcoming Daddy album and film. Kobalt has the right forward-thinking approach to work with a project as unique as ours, where we see our work not only existing within the music realm, but extending into the film, art space and beyond on an independent basis.”

We recently reported on Deadmau5’s move to Kobalt, bringing his own label Mau5trap, as an alternative to major labels in an industry where major artists are increasingly moving towards a more independent approach. Since being founded in 2000 Kobalt has built an impressive roster of artists that includes Nick Cave and the Bad Seeds, Paul McCartney, PJ Harvey, 50 Cent, Lionel Richie, Alt J, Pearl Jam and many more.

Kobalt president Diarmuid Quinn said of the signing: “Kobalt Label Services’ existence is built on supporting artists’ vision and giving them global representation on their terms. We’re here to support their vision, whether in media or sync and licensing or whatever it takes, and that’s true of everyone we work with, from Lenny Kravitz to Joss Stone to Nick Cave. We do it as a real partnership and give them all the resources they need.”

In the debut of their first music video on Vice, Franco said: “We took a ten poem sequence called ‘The Best of the Smiths: Side A and Side B,’ I originally wrote this sequence as a way to use one medium (music) to influence another one (poetry). The Smiths’ songs provided inspiration for the poems lending tone and situation. Once I had the sequence, Tim and I took the material one step further and turned the poems inspired by songs, back into songs of their own.”

New music partner O’Keefe added: “We created the record at the same time James’ mom ran a program teaching kids how to make films [at Palo Alto high school]. They developed scripts out of the same poems that we made songs out of, then shot film based on those scripts… While they were doing that project, we took all of the raw footage we had for each song and brought in editors to put together our film.”

Every song on Daddy’s album will feature a music video that can be watched individually or in tandem like a film. You can listen to Daddy’s first release ‘This Charming Man’ (not a cover) below.