In the quest to find things that interest teens The Hague in the Netherlands may have achieved this with a fully free, public DJ booth with working decks.

These days towns and cities have to work hard to entertain their youths, a simple swing won’t cut it anymore. You have to be creative. The Hague, a city in the Netherlands, have innovated with their latest public project to combine music, the internet, and mobile phones for a youth paradise.

The new DJ booth, built in a popular hang out spot for young people, features two decks, integrated Wi-Fi and a place to connect your mobile phone so you can play music through the decks. People can go hang out and listen to others, have a go at mixing some records of your own together, or just connect to the Wi-Fi and chill out. It’s one of the best public projects I’ve heard of for entertaining young people.

The DJ booth came about because youth ambassadors in the Mariahoeve district in The Hague wanted a place where youngsters could be involved in music. With that in mind they got in touch with Wi-Fi hotspot company KPN and Yalp, the company behind interactive playing products like the Yalp Fono (the DJ booth). 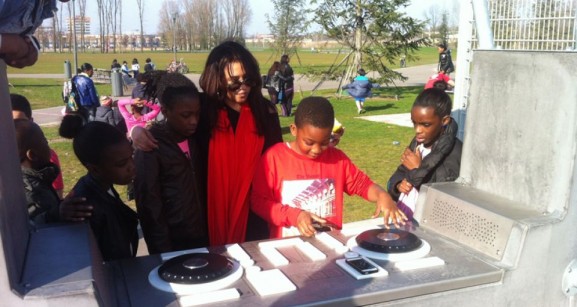 The DJ booth itself has been launched to praise in various locations around the Netherlands as well as some in Germany, Sweden and Australia. The Yalp Fono in The Hague however is the first to be installed with a Wi-Fi hotspot. Wi-Fi makes it more appealing to the youth whilst also giving access to a load more songs to play around with.

Councillor of The Hague, Ingrid van Engelshoven said: “The youth is growing up with smartphones, tablets and social media. Wi-Fi is almost a necessity of life for them.” The Yalp Fono hasn’t been designed with only teens and kids in mind however, as the booth will shut down at night and has volume restrictions for the surrounding houses.

Yalp Fono was unveiled in The Hague last week by municipal representatives, KPN reps, and a group of local young people. You can find out more about the project and similar ones here: www.yalpinteractive.com/fono