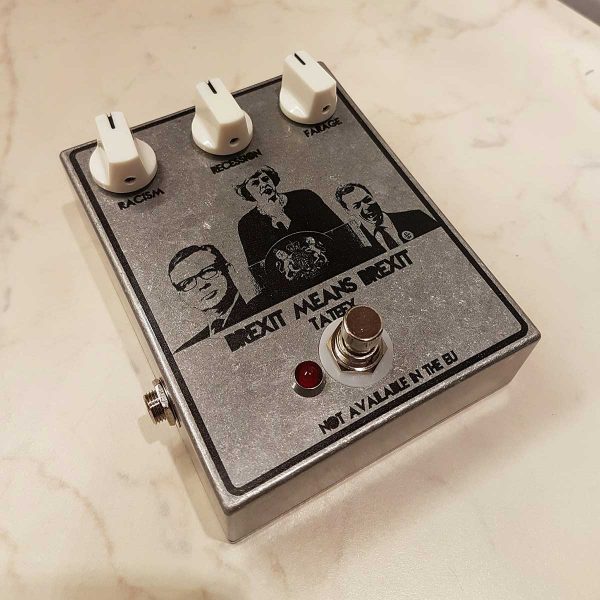 Since last year’s vote to leave the EU there have been a lot of ups and downs, next in the ups is this Brexit themed distortion pedal from Tate Fx.

The Brexit Means Brexit pedal is a super hot-rodded Rat type distortion pedal for instruments. Taking inspiration from last year’s referendum where the UK decided to leave the European Union the pedal features 3 of the biggest names in the build-up and aftermath.

Named after the Conservative’s favourite referendum line – “Brexit means Brexit” – the pedal is engraved with the images of Nigel Farage, Prime Minister Theresa May and Michael Gove. Nigel Farage and Michael Gove both spearheaded the campaign to leave the EU and Theresa May is now leading the government as Britain exits (though perhaps not for much longer). The pedal features three knobs for controlling your tone: Racism, Recession and Farage.

The Brexit Means Brexit pedal uses the OP07 IC. It goes from a nice light gain crunch all the way to borderline fuzz overload. The ‘Farage’ knob distorts (the truth) the more you increase and the ‘Recession’ knob helps you cut through the mix. All Tate Fx pedals are handmade in England complete with etch PCB’s.

The Brexit Means Brexit pedal isn’t the only political instrument pedal offered by Tate Fx. There is also a special Bullshit Booster pedal – featuring Donald Trump on the front, the Bullshit Booster is a clean boost capable of up to 20db of boost for guitar and/or bass.