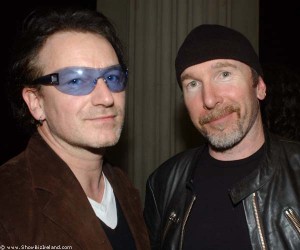 If you’re a human with a fully functioning brain who has been alive on planet earth at some point during the last 30 years, then there is a good chance that you’ll think U2 front man ‘Bono’ is right up there as one of the most despicable, self serving, self congratulatory, beyond-pretentious, hypocritical and disgustingly patronising ass-holes ever to have flopped from a uterus (a U2-erus? Oh dear…)

You may or may not know that he and his equally absurdly named buddy ‘The Edge’ have written a musical about Spiderman that is actually going to be performed on Broadway in our lifetime.

When I first heard about this around a year ago I thought “oh, well, they are massive bell-ends BUT this could be really fun, good for them. I just hope they don’t get all serious and disappear up their own asses on this one”. They have. The show has a ludicrously ponsey name – Spiderman: Turn Off The Dark (what could that POSSIBLY mean) and is already set to be the most expensive musical in Broadway history.

Anyway, here’s a first look at a song from the show, premiered on US television this weekend. The song is introduced by ‘Bono’ and ‘ The Edge’ looking extremely pleased with themselves.