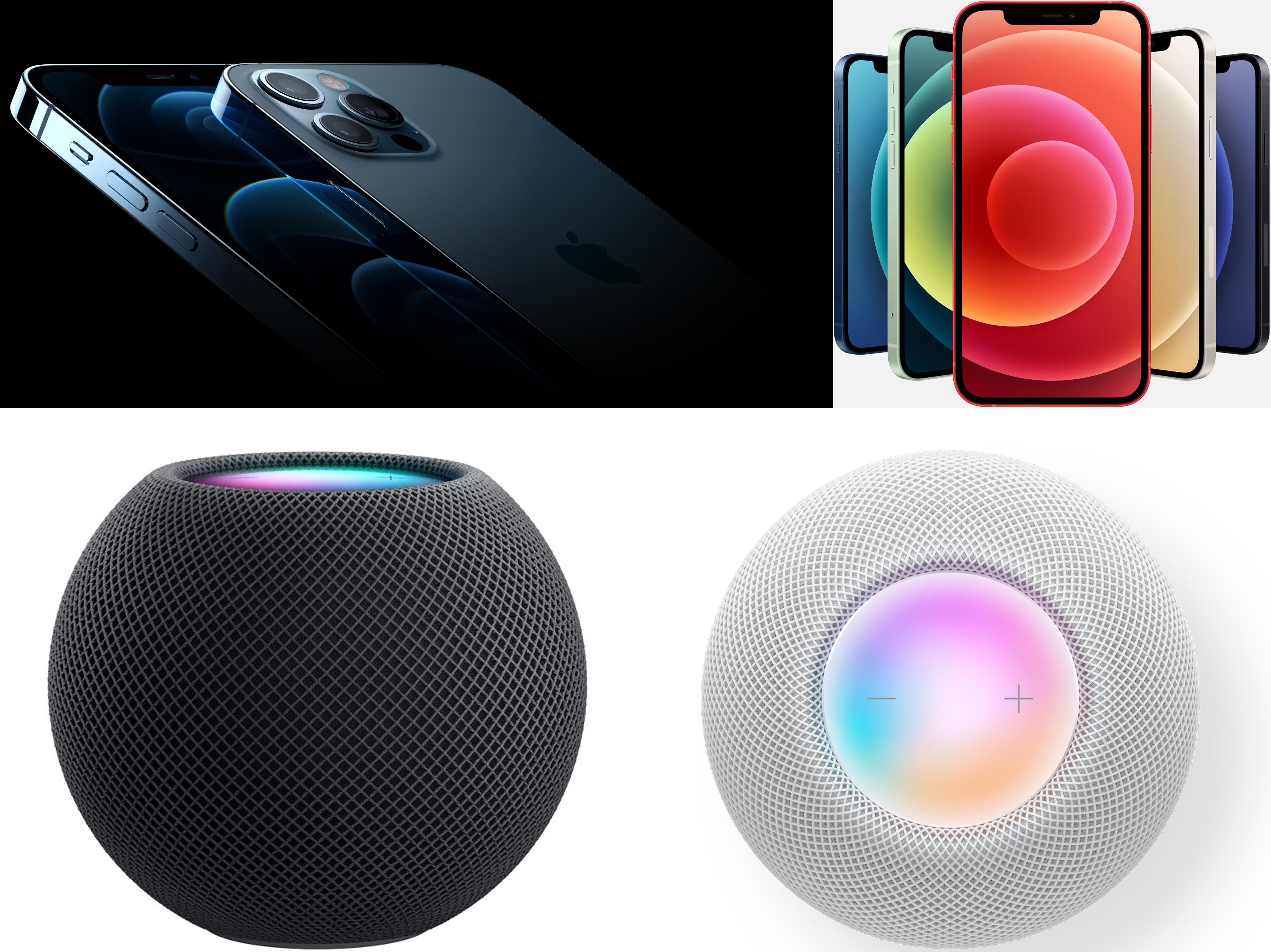 Apple’s “Hi, Speed” event yesterday saw the announcement of four new iPhone 12s and a HomePod mini. Here’s everything you need to know.

Tim Apple took to the virtual stage yesterday to announce an update to two product lines; iPhone 12 and HomePod mini. This was Apple’s third pre-recorded event, complete with plenty of impressive transitions as before.

We thought a new HomePod may be launching yesterday, but beyond being a smaller HomePod, we weren’t sure what to expect. HomePod mini is a smaller version of Apple’s original HomePod smart speaker launched in 2018, with newer internals and neat software tricks. At $99, this is a very competitive price and places it perfectly inline with Google’s new Nest Audio and Amazon’s new Echo smart speakers.

Externally, the new HomePod mini features an all new design, while sharing characteristics of the original HomePod. Available in White and Space Gray, HomePod mini stands at 3.3-inches tall, wrapped in a mash fabric that makes it look and sound great. The smart speaker is topped with a backlit touch surface for play/pause and volume controls, illuminating when Siri is activated.

HomePod mini has a few clever software tricks that should make the user experience seemless. As per usual, those tied closely with the Apple eco-system should benefit the most. Multiple HomePod and HomePod minis can play music in sync around your house. Two HomePod minis in one room will play music in stereo. The U1 ultra-wideband chip knows when your iPhone is nearby, allowing you to simply bring your iPhone next to your HomePod mini to start casting audio, with visual feedback on both your iPhone and the smart speaker. With AirPlay, you can cast any content to it from an Apple device or ask Siri to play content with support for Apple Music, Podcasts, iHeartRadio, RADIO.COM and TuneIn, with support for more music services in the next couple of months such as Pandora and Amazon Music. We believe this also means Spotify will be able to build compatibility for the HomePod mini.

The speaker recognises different voices for multi-user support, giving you a personalised experience for your apps such as Messages, Calendar, Phone, Maps, Apple Music, Weather, Reminders, Apple Podcasts and Find My.

HomePod mini is available to pre-order November 6th and starts shipping the week of November 16th.

2020’s iPhones have seen some impressive improvements all round. We knew most of what was announced from leaks and rumours, but there were a few surprises in store.

iPhone 12 (non-Pro models) prices are when locked to Verizon or AT&T. Locking to Sprint, T-Mobile or Sim-free costs an extra $30.

The headline feature this year, is all phones come with 5G, for improved mobile data download and upload speeds in areas with sufficient 5G antennas. mmWave is also supported in the US. The infrastructure is not ready yet in most parts of the world, but 5G support will become more useful down the road. 5G antennas are places around the frame of iPhone 12s. Apple say their new phones have more 5G bands than any other smartphone. When your iPhone doesn’t need the extra speed, it’ll intelligently switch to LTE to save battery.

The new mid-range iPhones now come in two sizes. The iPhone 12 is the same size as the iPhone 11 and the iPhone 12 mini has a smaller body than the 4.7-inch iPhone 6, 6s, 7, 8 and SE 2nd-gen, with a significantly larger 5.4-inch edge-to-edge screen. This makes iPhone 12 mini the smallest 5G smartphone in the world.

iPhone 12 comes in a new design similar to the iPad Pro, with aluminium flat edges, sandwiched between two pieces of glass, reminiscent of the iPhone 4 and 4S. Available in five colours, Black, White, PRODUCT(RED), Green and Blue.

For 2020, Apple are featuring OLED across the board, bringing the feature previously only available on Pro models to the mid-range iPhone 12 models. The inclusion of OLED further reduces the gap in differences between the iPhone 12 and 12 Pro. OLED thins down the display borders, features 2x more pixels than iPhone 11 and XR, as well as almost double the peak brightness at 1200 nits. The displays on iPhone 12 and iPhone 12 mini measure in at:

Apple are including a Ceramic Shield in iPhone 12 to improve screen durability, claiming 4x better drop performance than iPhone 11.

IP68 provides better water and dust resistance, capable of up to 6 meters of water for 30 minutes.

A14 Bionic is powering all iPhones this year, featuring a 6-core CPU, 4-core GPU and 16-core Neural Engine. Apple’s new iPhones are always best in class in terms of performance, allowing them to be usable for 5+ years. iPhone 12 is no exception.

iPhone 12 features the same dual-camera array as the iPhone 11, with an identical Ultra Wide and upgraded Wide camera. The wide camera now features a f/1.6 aperture for better low light performance and 7-element lens for sharp photos edge-to-edge. Smart HDR 3 hopes to capture detail in the highs and lows of an image. Night mode is available on all three cameras; Wide, Ultra Wide and front cameras, and Deep Fusion works on both the Ultra Wide and Wide cameras.

iPhone 12 is the first camera to record Dolby Vision HDR for greatly improved lighting on videos. On iPhone 12, this is capped at 4K 30 frames per second. Night mode timelapse videos are also available on this year’s iPhones.

2020 marks the return of MagSafe. This is one of the coolest additions to iPhone 12s and is unseen on competitors phones. MagSafe improves the wireless charging experience on iPhones. iPhone 12 is still compatible with all Qi chargers, but the magnetic coil inside iPhone 12 and Apple’s new cases will snap MagSafe chargers to the exact position needed. iPhone 12 supports upto 15W wireless charging.

Apple will be releasing a MagSafe Duo charger for iPhone 12 and Apple Watch, that is foldable when travelling.

MagSafe accessories are live on Apple.com and available November 23rd. The MagSafe charger comes in at $39, all cases are $49 and the leather wallet is $59. We are unsure on the cost of the MagSafe Duo charger. MagSafe will be opened up to third-party accessory manufacturers.

The iPhone 12 Pros offer a premium design, with stainless steel bands and a matte back glass. iPhone 12 Pro comes in four colours; Silver, Graphite, Gold and Pacific Blue. Tighter borders brings the display right up to the edges.

There’s new LiDAR scanner on the rear, as on the iPad Pro. This allows for improved AR capabilities, object/room scanning and photo/video effects. LiDAR is also used by the cameras to improve auto-focus and low light shooting.

The cameras on iPhone 12 Pro feature the same improvements found on iPhone 12, as well as Deep Fusion on all four cameras; Ultra Wide, Wide, Telephoto and front camera, and Night mode portrait shots using the LiDAR sensor. Apple ProRAW comes to the Pro models, combining the benefits of RAW with Apple’s image processing, giving you the best of both worlds. An API will be available for developers to integrate ProRAW into third-party apps. Apple ProRAW is coming soon as a software update down the line. 10-bit Dolby Vision HDR video recording is also available at up to 4K 60 frames per second.

We were hoping for a release date for the iPad Air and macOS Big Sur at this event, but no luck just yet.

We think there may be another Apple event held next month to debut the first batch of Apple Silicon Macs, as well as AirPods Studio and AirTags.

What didn’t we see in this year’s iPhones?

A 120Hz Pro Motion display was one of the biggest disappointments for iPhone 12. There was a lot of buzz surrounding Apple’s efforts in trying to make Pro Motion in year’s iPhones a reality. As the event got closer, we think Apple cancelled the feature due to battery strains on top of 5G.

All iPhone 12s feature the same size FaceID notch. Next year, we’re hoping for a reduced notch size in width or height, or even an under display camera and sensors. Apple will not put the camera and sensors under the display unless they perform as well as they currently do.

As well as FaceID or instead, we may see the return or TouchID. We saw TouchID on the iPad Air move this year to the power button. We’d like to see it implemented into the power button of the iPhones or under the display.

The return of MagSafe further suggests the removal of all ports on future iPhones. We think a port-less iPhone 13 is a strong possibility.

No 4K 240 frames per second video as earlier predicted.