Alibaba Music have upgraded their music streaming with a new online platform to connect fans with members of the industry called Alibaba Planet.

Alibaba Planet is the new music based social app from Chinese digital giants Alibaba. They say that it will open up an opportunity for fans to connect with artists and vice-versa. It could also be translated to connecting sellers with buyers.

Using the app on your smartphone users will be able to follow their favourite artists and stars to keep up to date with their activity on the app, take part in “fan activities”, buy music merch, and watch live streams of certain performances. The company also has licensing agreements with BMG and Universal Music Group to stream music, however not Warner Music Group or Sony Music. 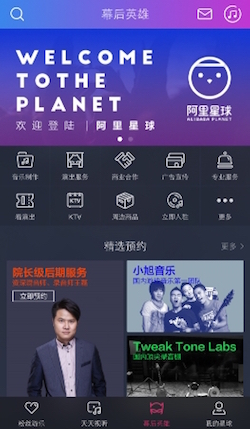 Alibaba have taken on board music industry executive Song Ke to run as CEO. In a statement he said: “Alibaba Planet amplifies interaction among stars, users and merchants, creating more business opportunities and delivering more entertainment offerings.” He added that they plan “to become the world’s largest Internet-based music company, and to build up the commerce landscape for the global music and entertainment industry”. Ambitious talk in a market filled with behemoths like streamers Spotify and Pandora.

Alibaba Planet has a lot to live up to aiming to make artist interaction possible whilst providing an all-in-one platform for music, video and merchandising. Alibaba plan to launch an English version of the app later this year, though gave no specific date.