In may 1956 Elvis Presley was becoming an international sensation with his first RCA single ‘Heartbreak Hotel’. The record blasted to the top in the USA and was second only to Ronnie Hilton in the UK. Ronnie Hilton with choir and orchestra conducted by Frank Cordell found the lead on the week beginning May 4th 1956 and stayed there for six weeks. 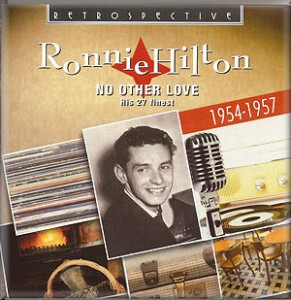 voice, although surprisingly speaking with a thick Yorkshire accent. Encouraged by his wife Joan he signed and recorded with HMV and enjoyed a successful run of hits like, ‘I Still Believe’, ‘Veni Vidi Vici’ and ‘A Blossom Fell’ amongst others before finally achieving the Elvis destroying number one ‘No Other Love’.

Ronnie said, “Perry Como was always my favorite singer and had recorded ‘No Other Love’ and managed to collect a gold disc in America with the record. Wally Ridley leaked to me that they weren’t going to release it over here until he came over so could i do it and get it some exposure on the TV and Radio?

The music was originally taken from a melody that Richard Rogers had put together for an old television series named “Victory At Sea”, which enjoyed original commentary for Sir Winston Churchill. The piece of music was called ‘Under The Southern Cross’ and was loosely based on the Tango. Oscar Hammerstein used it and put words to the music for the musical “Me And Juliet”, which never came to England. So With the writers Richard Rogers and Oscar Hammerstein under producer Wally Ridley they were all set for the studio and what would be the songs UK debut. Wally Recalls “I remember Ronnie saying, If i can’t sing with that, I can’t sign with anything. He was one of the few singers who listened to what they orchestra was actually doing”.

In his later years Ronnie became a popular Radio 2 presenter with a series names “sounds of the fifties” until he died aged 75 in 2001.