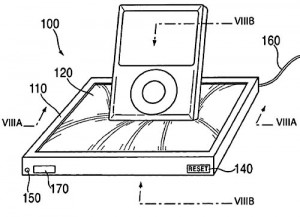 Nanos, Shuffles, Touches – Apple have made so many different shapes of iPod that you need adaptors for practically every accessory you can buy. Apple likes things to look sleek and neat, so having fiddly bits of plastic to swap over for each of the many iPods they would like you to buy (you couldn’t possibly take your 60GB classic jogging with you!) is not acceptable, and so for all the neat freaks and must-have-it Apple fans, they’re developing a universal dock to accommodate all different shapes and sizes. They’ve filed a patent for, as they phrase it:

A dock for supporting a plurality of differently-shaped electronic devices, the dock comprising: a housing; a connector coupled to the housing; and a compressible support layer positioned at least partially about the connector, wherein at least a portion of the compressible support layer compresses to the shape of at least a portion of an electronic device that is attached to the connector.

Which translates to a standard iPod connector in the middle of a squashy or springy surround, which you compress part of by pushing your iPod into, the uncompressed part supporting the sides of the device, perhaps a bit like one of those pin-art pads that were fashionable around when the Lawnmower Man came out. I’m a little unclear as to why you’d need one, my iPod sits on my hat on top of my computer, but then I use a PC and have been known to eat cereal at my desk – hardly the action of a stylish Mac user. Perhaps it makes your music sound better.