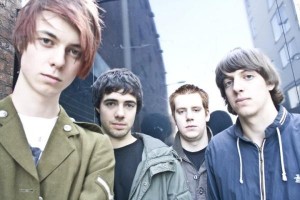 Hark! It’s The Harks, a Stockport-based work-in-progress currently offering two tracks to download for free from their myspace. I was pointed towards these and asked for my opinion. Here goes…

It wasn’t the most exhilarating of starting points; a drab myspace, the usual moody group shots, a pretty dry biography. I was prepared for forgettable, faintly emotional and poorly produced indie and ‘Last Call’ didn’t do a great deal to tackle my prejudices. The opening riff and the general starkness of the track reeked of a tamed Interpol with a swish of britpop not improving things, just localizing them.

I contemplated abandoning the review altogether after the opening bars of ‘I Know’ – its arpeggios hinted that some terrifyingly mediocre indie balladry might be following and I feared the worst. Imploring myself to keep listening, I was warmed when the wandering guitar was joined by a vocal straight from the glory days of 90s shoegaze. From there, as if my mind was being read, the opening soundscape stopped, chords and drums hit, and a song truly began.

Below the flat vocal and unfinished production of ‘I Know’ is the foundation of a classic pop song. The ‘I won’t be around’ refrain has an indie classicalism about it, staying with me and demanding replays. Goodness knows what it’ll do to teenage girls with crumbling relationships. Probably good things.

7 Pop Music artists on our new music radar for 2021

7 emerging artists making new pop music to get excited about in 2021.

Keep an eye on these new artists refreshing the indie rock scene in 2021.