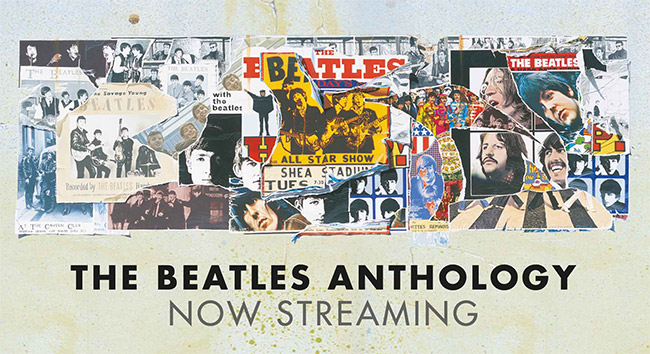 Last December The Beatles catalog of albums arrived on streaming services like Spotify and Apple Music, and now their collection of bonus material has too.

Just over 3 months since all The Beatles albums were brought onto streaming services and now we’re getting to treated to an extra 6 hours of music from the four pop-pioneers. Featuring live recordings, unreleased tracks, alternate versions and demo tracks; ‘Anthology’ Volumes 1-3 are now streaming on all the major services.

The Anthology collection was released as 3 double-disc albums in 1995, to accompany an 11 hour documentary by the remaining Beatles at the time – George Harrison, Paul McCartney and Ringo Starr. The albums feature a massive collection of unreleased tracks, before 1995, even including new material; ‘Free As a Bird’ and ‘Real Love’ were both adapted from demos of John Lennon in 1977 by the remaining Beatles for the Anthology collection. Free As a Bird went on to become the 34th single by The Beatles to reach the Top 10 in the US.

The 3 Anthology Volumes were remastered by the same group of engineers at Abbey Road Studios that remastered their studio albums in 2009. The team received the Grammy Award for Best Historical Album at the 53rd Grammys for their meticulous remastering and subsequent collection of all The Beatles albums.

Whilst 6 hours of material might sound like a dream to many of you, it may sound like a drain for others. Billboard have collected the 15 songs they think you should definitely listen to if you don’t want to hear the whole lot. Read it here: www.billboard.com/articles/columns/rock/7318952/beatles-anthology-streaming-demos-alternate-versions