Drum machines have had a massive influence in contemporary music with drum synthesis appearing on more tracks than you’d ever realise. With it’s prevalence today, I want to take you back to the classics that made drum machines what they are today.

Since the inception of drum machines we’ve seen them go from giant machine boxes reproducing basic percussive sounds, to the ability to hold hundreds of different drum machine sounds and kit samples in your hand. In under 100 years music technology has completely transformed and from the early days of digitising music with seemingly just an advanced tempo click we’ve gone on to use technology as a primary part of much of the music you hear today.

From the surreal, synthesised ad-music of Raymond Scott in the wake of electronic music, to the works of an infinitely broad range of artists today; from Radiohead to Aphex Twin, Funkadelic to David Guetta. As we continue to move further into a world of wonder and musical advancement by technology it’s always good to take a look back at the legacy of how we got here. The legacy of drum machines.

The Rhythmicon is the grandaddy of drum machines, the one that started it all. Created by the avant-garde American composer and music theorist Henry Cowell, he wanted to create rhythmic patterns that were impossible for a human to perform. With the help of Russian inventor Leon Theremin who produced the machine, Cowell created the first ever drum machine.

Rhythmicon can create up to 16 different rhythms which can be played on it’s keyboard. Each rhythm can be played independently or in combination with the others. It produces it’s percussive-ish sounds by using a romantically complex sounding method – It involves light being passed through radially indexed holes in a series of spinning cogwheel discs before arriving at electric photoreceptors.

Music educator and friend of Theremin, Joseph Schillinger, calculated that it would take 455 days, 2 hours, and 30 minutes to play every combination available on the rhythmicon. The trailblazing capabilities of the Rhythmicon are impressive to say the least but by today’s standards are fairly underwhelming.

Conductor Nicolas Slonimsky, who was commissioned for a second version by a friend of Cowell’s, said in 1988:

Like many a futuristic contraption, the Rhythmicon was wonderful in every respect, except that it did not work. It was not until forty years later that an electronic instrument with similar specifications was constructed at Stanford University.

It could do everything that Cowell and Theremin had wanted it to do and more, but it lacked the emotional quality essential to music. It sounded quite sterile, antiseptic, lifeless – like a robot with a synthetic voice.

Of the original Rhythmicons one is now at Stanford University, and the one given to Slonimsky is on display at the Smithsonian Institution. 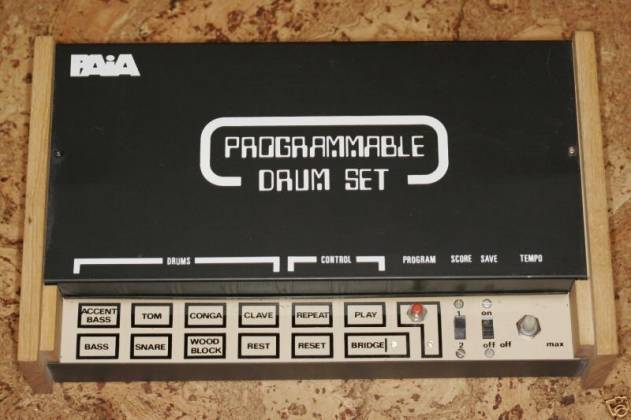 After a long period of large, varyingly improved drum and rhythm machines the PAIA Programmable Drum Set came along in 1975 and broke new ground. Whilst the kit itself didn’t sound that great and certainly wasn’t the best quality drum machine it did something unique that has become standard – it allowed you to programme your own rhythms.

Despite being forgotten about shortly after thanks to sounding pretty tacky and lacking durability – it came with instructions to build it yourself – PAIA remains important for what it introduced in drum machines. For the first time users could programme their own beats, something that is now a staple in drum machines.

PAIA used analogue synthesis with ‘ringing oscillators’. Ringing oscillators is a method of sound synthesis that uses a filter close to oscillating all by itself. A little pulse then hits the filter and causes a ringing that (sorta, kinda, maybe) sounds like a drum.

Not many high-profile artists used the PAIA Programmable Drum Set but Peter Gabriel was an enthusiastic early adopter. 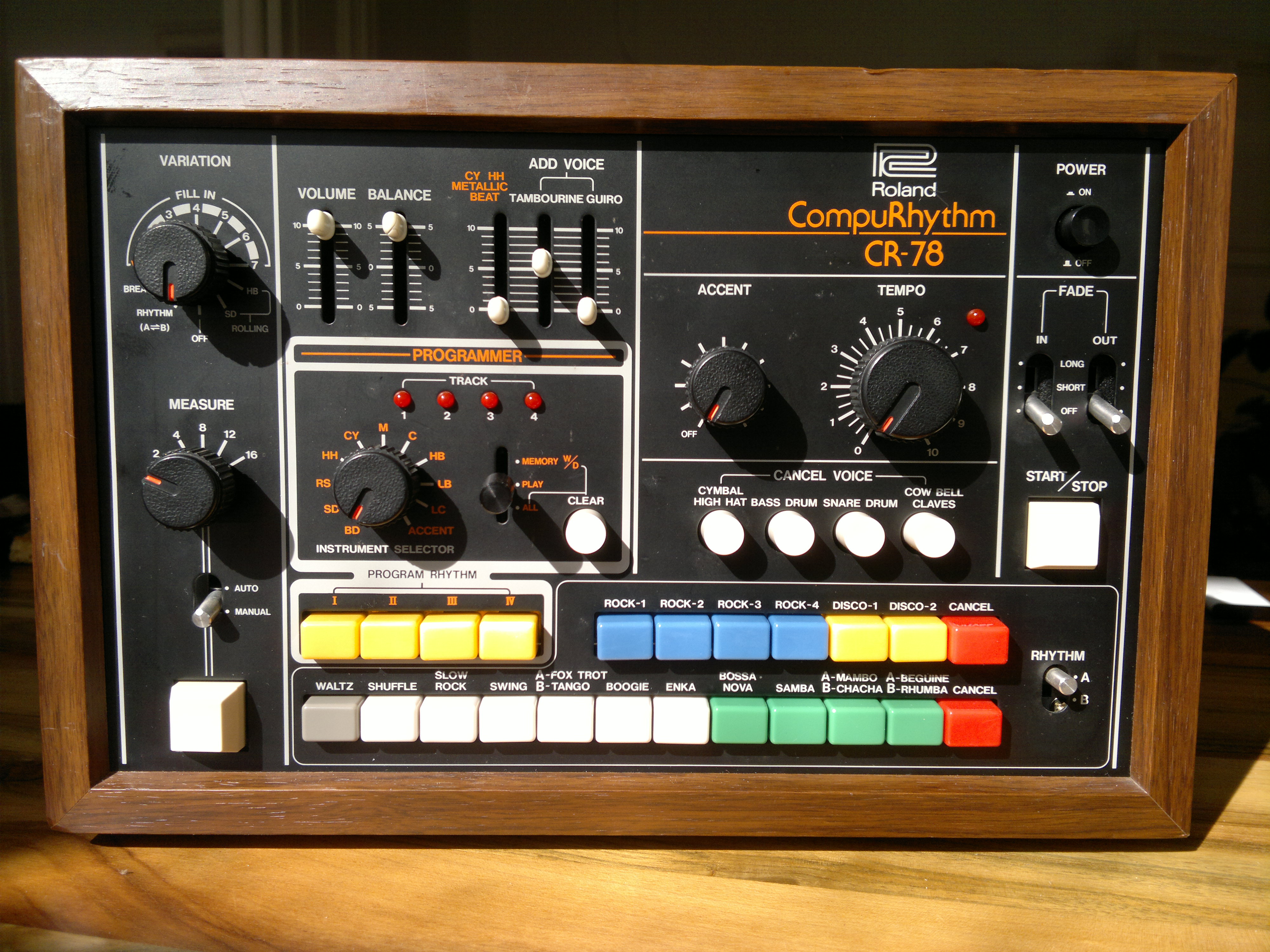 We all know Roland hold a significant place in the history of drum machines and we’ll get to that a bit further down… But the less appreciated Roland drum machine CR-78 gave a new level of customisation that has seen it used by a massive variety of artists.

The CR-78 marked the first drum machine that you could store your original drum patterns on with four programmable memory locations. It may have required an additional piece of kit, the WS-1 box, to step program your sequence but it was still groundbreaking. The CR-78 featured 34 in-built preset rhythms using 14 analogue drum tones.

Roland’s CR-78 was also unique for it’s ability to add fills or mute certain sounds. You could also mess with it’s bass and treble volumes to cancel out certain sounds, so that you could customise the preset sounds.

It was built in a neat wooden veneer cabinet as it was originally designed to accompany an electric organ. The built-in sounds were based off of older Roland drum machines like the Roland Rhythm 33, 55, and the 77.

The CR-78 has been used by many artists like Fatboy Slim, Underworld, and in Phil Collin’s In the Air Tonight. You can easily recognise it’s distinct sound on the intro to Blondie’s Heart of Glass. 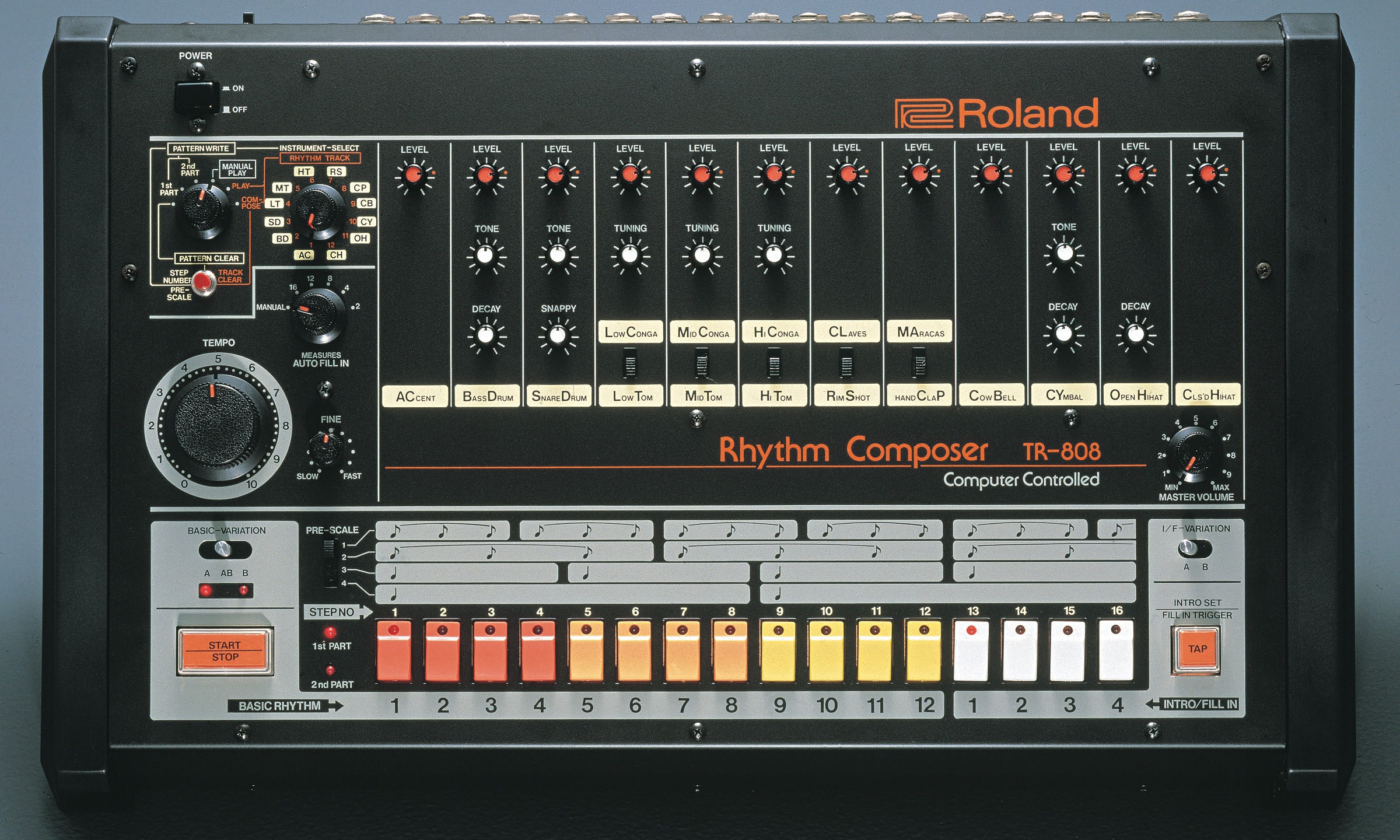 If you don’t recognise that name then this must be your first time reading about drum machines! Roland’s TR-808 is recognised worldwide and is used frequently to this day, whether as the original or as a sampled offshoot the distinctive 808 sound has remained in demand since it’s creation.

Roland’s 808 drum machine introduced one of the world’s best step sequencers to the world. It’s unique, synthesised percussive sounds are like a unique branding that sets the 808 apart from other drum machines. Although the overall sound was part of it’s appeal a large draw for many was the 808’s ability to produce really low frequencies with it’s bass drum noise.

The 808 also gained popularity for it’s cheaper price, though it was still $1,195 at the time, opening it up to wider audiences. Although it has been used by artists across all genres the 808 has marked it’s legacy particularly in hip-hop where it’s still used today by artists like Kendrick Lamar and Kanye West.

3 years after releasing the 808 Roland followed up with the even more refined 909 that has had a similar, though less high profile, legacy. The 909 introduced sample based hi-hats and toms, improved sound shaping options, and MIDI implementation. The 909 shaped the sound of techno and house for years to come. 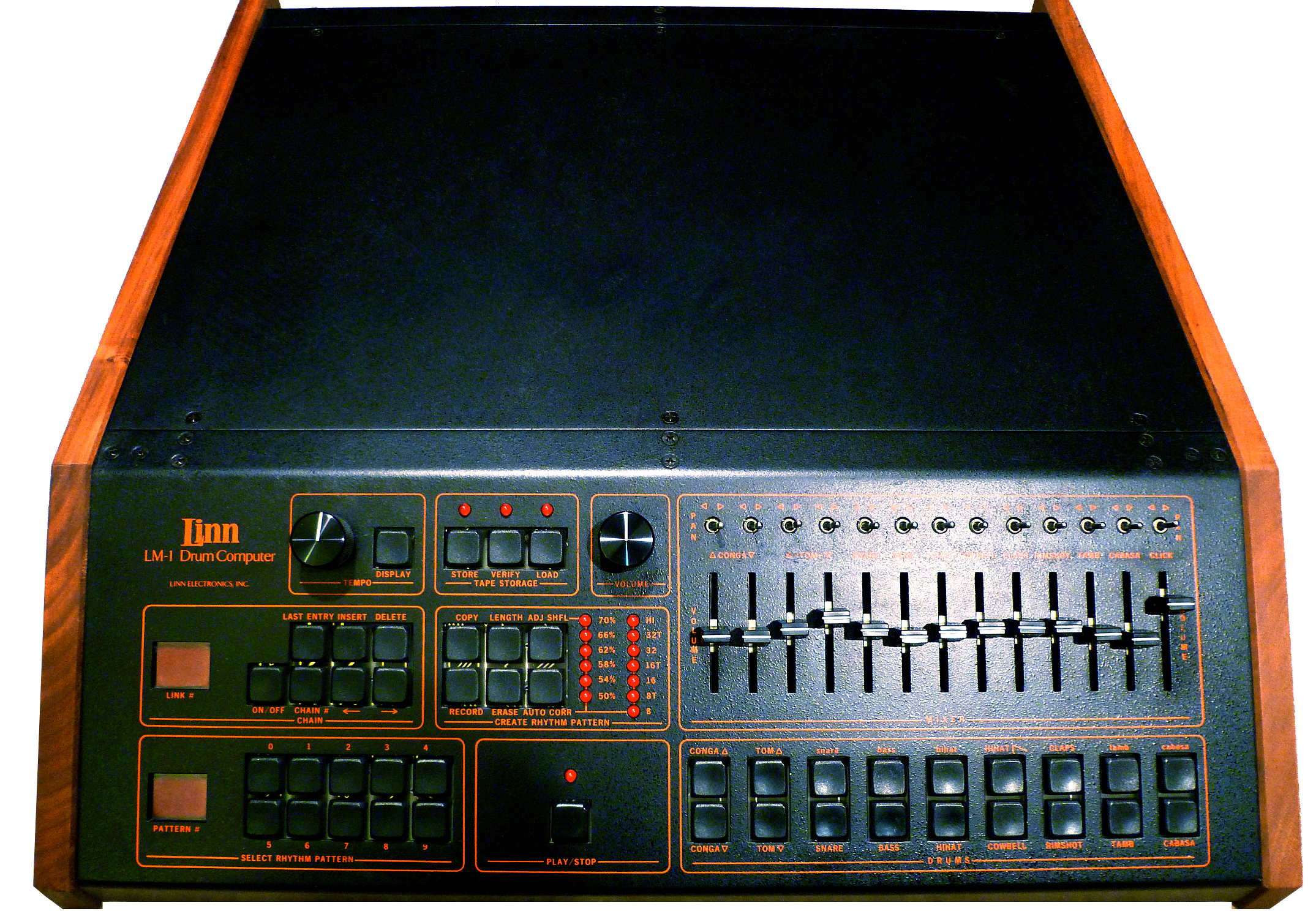 The LM-1 was one of the most revolutionary drum machines ever made for one very good reason. It was the first drum machine to use real drum samples, from acoustic drums. It truly changed the game, all of a sudden bands and musicians could create a real-sounding rhythm section with just a machine.

Until the LM-1 “Drum Computer” drum machines, despite gaining popularity, were used like a separate instrument to the drums rather than a replacement, with their synthesised sounds incapable of matching a real rhythm section. The LM-1 changed the game forever and introduced drum machines to a whole new crowd who could use it for real drum sounds.

Though it was intended as just an accompaniment the LM-1 was so effective that it ended up used for entire rhythm sections. In fact it was so popular that many thought it was going to put every session drummer in LA out of business. Certain drummers, like Jeff Porcaro of Toto, went and bought drum machines to offer “programming services” in case their drumming skills became void.

The LM-1 featured 12 8-bit samples, mostly player by session drummer Art Wood, and 56 user patterns to programme. It’s sequencer was built-in and with it’s 13 channel mixer and individual output jacks for each drum element it allowed for an impressive level of customisation.

The Linn Electronics LM-1 changed the game but it wasn’t cheap and only found popularity among major artists rather than more independent users. Artists who used it include Human League, Abba, Jean Michelle Jarre, James Brown and many others. Herbie Hancock’s fully synthesised ‘Textures’ is the first track known to have used it. 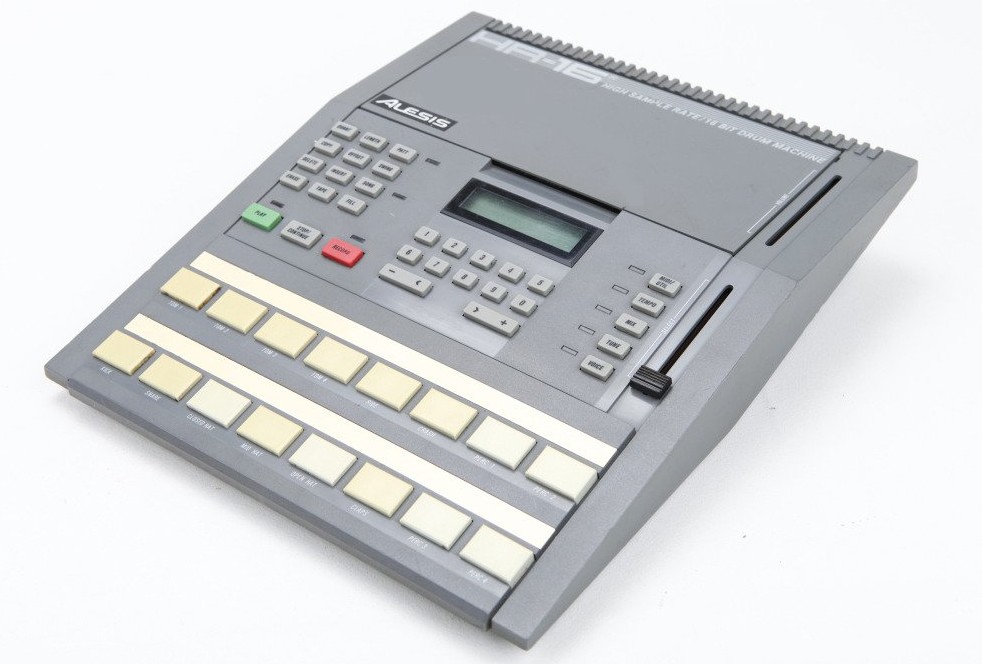 The final drum machine in our list is the Alesis HR-16. Whilst it may not be the most widely famed machine and it kind of looks like a receipt printer, the HR-16 went down in history for its affordable price tag that opened it up to general consumers, making the technology of drum machines way more widely available.

Despite being cheaper Alesis’ HR-16 was still a powerful kit with 49 16-bit sampled drum and percussion sounds – 10 kicks and 7 snares with a complete ethnic set. You could programme an impressive 100 patterns with it which you could step sequence or programme in real-time.

Of course by making it cheaper the HR-16 wasn’t a perfect machine and was said to sound crisp and clean, but cheesy. It’s successor the HR-16B had improved samples for a better sound and was used for a lot of techno and electronic music for it’s new sounds.

The HR-16 marked an important step in making music technology more easily available. Fortunately it wasn’t an anomaly in a high-end market and was the start of a recognition for the low-end consumer. Drum machines today are available in all sorts of packages capable of whatever you can dream up whether digital or physical, but they all share an ancestry in these 6 drum machines that can be seen and heard in their every aspect.