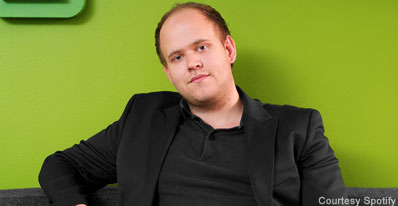 Has European music startup Spotify finally worked out the online music business? Rumors surfaced today that the company is raising a new round of financing of $50 million or so, at valuation of $250 million.

The new financing will bring in new “strategic” investors, which include rights holders in other geographic locations, according to our source. And while new investors are balking at the $250 million valuation, strong demand from venture capitalists is supposedly driving this deal to a close.

The company has yet to launch in the U.S., but boasts 2 million UK users, its biggest market. They are also launched in Germany and Sweden. Users can listen to music for free on a downloaded application with advertising, or pay a premium fee to remove the ads. Some labels are supposedly making more money now from Spotify than iTunes in the markets the service is available.

We have previously reported on the U.S launch as well as their upcoming iphone application.

Other sources that are confirming the investment include: techcrunch, venturebeat, paidcontent, arcticstartup and musically.

QQ Music dips its toes into the Metaverse with “Music Zone”

great post, i am wondering when it will come to US

Spotify will definitely be in the USA market by the end of 2010.