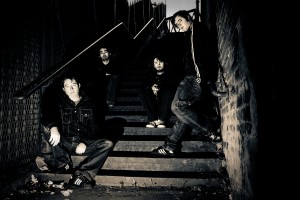 A New Breed Of Monkey are a cool, dirty indie band from Burnley . Their
songs are sometimes melodic, sometimes fast and grimy, but never
miss-fitting.

Taking you back to the nice, simple, black and white indie genre, a few
silky-smooth riffs and airy instrumental numbers display how well composed
the band are, the formula works well as the instruments and vocals melt into
one clean-cut sound.

A New Breed Of Monkey play a mixture of Progressive, broodingly atmospheric
indie and energetic Indie-Rock distinguished by some intelligent lyrics,
haunting melodies and sharp guitar-work. Vocally front-man “The Bung” is
similar to that of Maximo Park’s Paul Smith and in the quieter moments there
is even a little Guy Garvey (Elbow), and like their northern counterparts
there is a great deal of emotional intensity in the music ANBOM make. Very
tight and well arranged it’s a compelling direction which sits nicely
alongside the current crop of indie hopefuls yet as the same time is nicely
removed ensuring the band standout as something original and genuinely
exciting.

A New Breed of Monkey have just uploaded their latest album ‘Ignorance Is
This’ to RouteNote.

The band are on the verge of great things, having headlined most venues in
Manchester including the Academy, The Ritz, and appearances at Birmingham
Carling Academy and The Cavern in Liverpool. Mannequin, one of the tracks on
the album, has also been licenced to ICJ Inc. in Japan! (non-exlusively)
http://www.anewbreedofmonkey.co.uk
http://www.myspace.com/anewbreedofmonkeyofficial

Get all Ocean Swift Synthesis plugins and virtual instruments for free

Ocean Swift Synthesis have made all their products, including synthesizers and sound packs, available for free download.

There was another rise in revenue for Universal Music compared to the same period in 2020, as the music giant published their Q1 results for 2021.