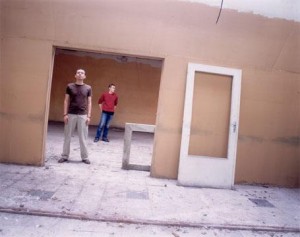 I’m having a really hard time reviewing this album, possibly because I want to like Austerlitz a lot more than I actually do.

The opening track ‘Walking into the Fire’ excited me a great deal. The organ riff that opens both the song and album is an inspired and clever hook that is sparse enough to give the rest of the band room to breathe and build on whilst suggesting enough of a sense of pulse to drive the verse’s tempo. The song reaches its triumphant climax during the middle-8, where we hear the bulk of the band pull out allowing a dense vocal harmony to take precedence before crashing back in with their interesting intricacies. As the tempo picks back up and the band race towards an uptempo coda, I found myself wanting more; a perfect album opener.

Sadly this is where it all starts to go slightly wrong for Austerlitz. The rest of the album caused me a great deal of confusion and disappointment, offering only rare moments of relief where the true potential of this band was allowed to present itself.

The second song ‘Smoothing my anger’ (odd song title), although a pleasant enough rock song is a fairly good starting point for my main criticisms of the album. First off, the singer (who I believe to be a French gentleman) seems to put on different accents throughout the album. In this song he goes from sounding like a Dick Van Dyke-esque mockney to some kind of flag saluting American patriot in a matter of minutes. This makes the delivery feel a little too insincere and contrived, which is a massive shame because on occasion he speaks allowing us to hear his real accent, which is utterly enchanting and lovely.
This song also seems to be a fairly massive departure stylistically from the first track on the album, which was an interesting and progressive joy to digest. This feels like a fairly normal rock song, which is a pretty big let down if you enjoy what came before as much as I did.

The rest of the album is full of perfectly acceptable rock songs that probably won’t offend you, which again is a little bit of a problem. The band possibly tries a little too hard to be interesting. Harmonic dissonances, unnecessary messing with meter and too many subtle layers of texture make listening a little too uncomfortable at points in the album. In fact that’s probably my main gripe with the whole album; too much fiddling. Everything is very busy a lot of the time and if it isn’t, it will be in a matter of seconds. Texture and ear candy are fine but need to be carefully sprinkled atop the substance with care, not thrown in as though a necessity only to spoil everything. The worst example of this can be heard in the penultimate song ‘Stay In Line’, which is so disjointed that no matter how many times you listen to it, you’ll have to allow a couple of minutes to adjust to whatever universe you need occupy for this to be remotely comfortable.

The album’s sign off ‘All That You Said’ is a welcome return to quality. Filled with French fancy and electronic accompaniment, the song builds to a superbly tasteful keyboard solo, which triggers the beginning of a genuinely lovely fade out that leaves you totally satisfied.

Despite all the above criticism there is definitely enough here to suggest that this is a band worth keeping an eye on. There are probably more tracks worth listening to than not and I have to admit that on a second and third listen, I found the album far more tolerable and approaching enjoyable. Hopefully a follow up effort will bring to light the talent and potential that I’m sure these chaps possess.

I’ve included a video for the belting album opener ‘Walking into The Fire’. The album can be purchased from here on iTunes.

If you want to be reviewed then please email me; monkeyhotel85@googlemail.com or follow me on twitter @monkeyhotel