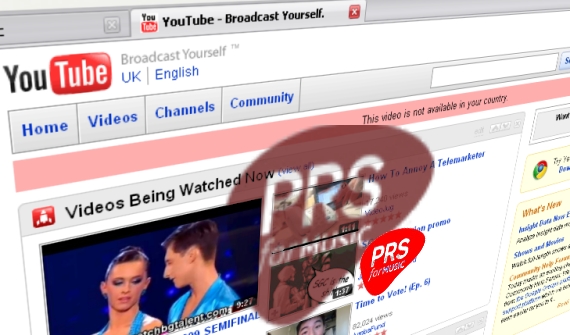 Previously here at RouteNote we have been pretty critical of the PRS and how they go about their business. However, today the PRS and YouTube have finally announced that they have come to an agreement on licensing.

Google has confirmed that the new deal is a lump sum just like the last one, thus paying an upfront amount but not a per stream minimum. It is about time that the PRS be a little more flexible on their approach to licensing, but I still wonder if Google had access to work out which artists are PRS registered and then based the lump sum around that. Songwriters and composers will be keen to hear the finer details of the deal though, in terms of what tracking will be used to equitably share out the cash.

The deal is backdated to 9th January when the previous deal expired, and runs until June 2012. Neither Google nor PRS for Music is saying how much the upfront payment is, naturally.

YouTube’s director of video partnerships Patrick Walker says that “We are dedicated to establishing and fostering relationships that make YouTube a place where existing fans and new audiences can discover their favourite content – whatever it might be. We are extremely pleased to have reached an agreement with PRS for Music and look forward to the return of premium music videos to YouTube in the UK where they will join a variety of other content to be enjoyed by our British users.”

Distributed via RouteNote, the new track released under Strange Fruits has gained big numbers after being picked up by Spotify’s playlist Shuffle Syndrome. DMNDS, Koosen & Green Bull featuring KOYSINA published this cover of The White…

Get Deezer Premium and HiFi cheaper than ever for Black Friday!

From November 27th until December 13th you can subscribe to Deezer’s best music listening experiences for half price in their best deal ever. Deezer‘s Black Friday offering is an incredible snatch for music lovers, offering…