Play vinyl wherever you are with RokBlok, a small block that rides around your records and plays vinyl all on it’s own without a turntable.

Vinyl gets a lot of love, especially recently as vinyl records are seeing a resurgence in sales and demand. The problem is music doesn’t get much less portable than with vinyl, which normally requires a large turntable to fit the big discs onto and read the grooves containing the music.

Pink Donut have come out with a solution to making vinyl portable by creating RokBlok, “the world’s smallest wireless record player”. RokBlok works ridiculously simply by riding the grooves around your record, picking up and playing the music as it goes. It’s so simple you just need to lay your record down flat on a surface and place RokBlok on top, that’s right the record just sits there whilst being played.

RokBlok features built-in speakers so you can place and play straight away but if you want to listen to really pump the tunes and get the best quality the RokBlok can connect to speakers or headphones via Bluetooth from up to 30 meters away. 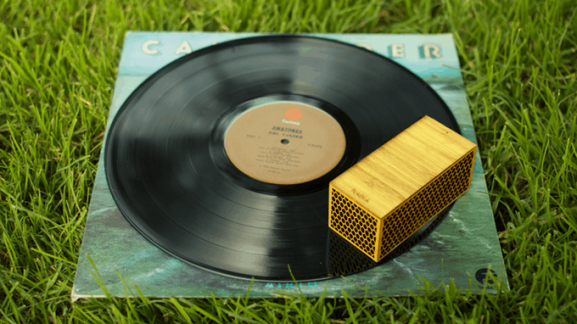 RokBlok is revolutionary in the fact that you need only a flat surface to place your record on, no player, no needle and arm, not even a platter. Even if you want to go out somewhere and listen to music, it’s as simple as
placing your record cover on the ground and placing RokBlok on top.

RokBlok is available from a Kickstarter campaign currently where Pink Donut are also offering ‘SheetRok’ as a cheaper alternative. SheetRok isn’t really a player but more of a novelty, but a fascinating one at that. It is simply a piece of paper that folds in a certain way that it can audibly play vinyl when you spin the record in it. SheetRok is available for only $15 and comes with a random record chosen from the company’s record collection.

RokBlok is currently available at an “earliest bird” price of $59, 40% of it’s retail price of $99. Head to their Kickstarter page now to find out more and order one for yourself.

Beautiful article!! This content will surely give a new experience to all the ones who are searching something new for vinyl records. Thanks for sharing!!