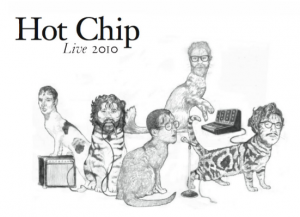 Hot Chip are previewing their new album ‘One Life Stand’ over on the Guardian’s website (unfortunately only fully available in the UK), via We7’s streaming service.

The album itself is a return to their previous form, mixing heavily electronic beats and samples with roomy, live sounding instruments at will, but always with delicate care and attention, Baroque sounding string synths, trashy Pixies-esque drum kits, steel drums, marimbas[?], vocoders [ sorry Justin 😉 ], and flagrantly dance sounding bass lines nestle in together under the distinctive semi-falsetto vocals rising above the tracks, blending elements of electronic music from the last two decades together in a disctinctively stylish way.

Hot Chip may not have the bass-thumping force of other electronic acts like Simian Mobile Disco and the Chemical Brothers, but this album drips energy and musicality. Check out the video of the album’s title track they’ve posted on their Dino-space – if you like it you might consider catching them on their current tour, visiting most regions of the UK before moving on to Europe and America, full listings below.

You can also pre-order the album from their website, getting yourself a free bonus track in the process (but sadly obviating the need for a digital distributor, ho hum…)

Spotify ‘Listen & Book’: use your favorite music to find your next holiday

Now, Spotify and EasyJet have created Listen & Book to “help those with wanderlust, but feeling a little wander-lost” find their next dream holiday destination.

How to make a mix playlist on Spotify with friends

You can create a Spotify mix with friend or foe with Friends Mix on Spotify, and make a joint Spotify playlist.