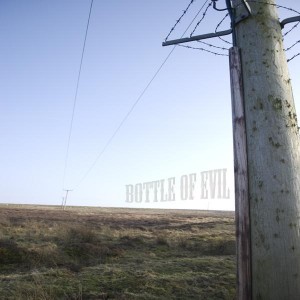 This week I will be reviewing an album that can only be described as “Nu Gaze.” If you go to the wikipedia entry on “Nu Gaze”, you will find this sentence at the end of the first paragraph; “Some people consider the term “Nu Gaze” derogatory and dismissive.” I am such a person.
When I say the words “Nu” and “Gaze” together, the image that appears in my head is a group of moody idiots in their late twenties who probably think of themselves as being deep, introspective types that no one really understands. They probably think that everyone else thinks the same of them too, “who is that troubled soul? I wonder what he’s thinking. God I’d love to hear about his emotions/views on politics/stories of a troubled childhood”, whilst in reality everyone knows they are little more than a moron who needs to GET A SODDING GRIP AND HAVE SOME SEX FOR ONCE. OK, that’s out of my system now.

This is where my bitterness stops. Bottle Of Evil are an utterly superb electronic “Nu Gaze” outfit, who don’t seem to be capable of doing anything wrong on their debut, self titled album.

Everywhere I have looked the track listening is different, which has annoyed me slightly. For this reason I can’t give a proper album review, but I can pull out some highlights, of which there are happily plenty.

I strongly suggest tracking down the songs “Station” – a song with an unspeakably wonderful riff that no matter how many times you hear it never gets boring, “Same Old Story” – a brilliantly subtle number that has one of the most catchy and uplifting acoustic guitar riffs you’re ever likely to hear , “Holding Up The Bar” – which is by some distance the best song on the album and manages to balance some seriously dense textures with the utmost taste and “Seize The Day”, which you can hear at the bottom of this post.

My only minor criticism of the album is the rather excessive use of reverb on the voice and to be honest, most of the instruments. This is however, more than made up for by actually being musically solid – unlike a lot of music in this style. Clever chord progressions, tunes and phrasing; musically speaking they really have got the balance spot on.

You can hear a fairly substantial portion of the album by visiting their MySpace page and can buy the album by clicking here.

If you would like to be reviewed on this blog then please get in touch; luke@routenote.com or on twitter @monkeyhotel

Seize The Day by evilhand

Now this was an album I really enjoyed hearing as it came through RouteNote.

Deserving of a much greater audience than it has.

oh… you can also stream the whole album on Spotify.