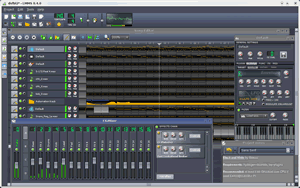 KVR are forever releaseing neat little bits of software, and for those of you bold enough to be running Linux [I’m considering it, after my XP system got a virus for the second time in 3 months], they’ve released the Linux MultiMedia Studio:

LMMS is a free cross-platform alternative to commercial programs like FL Studio, which allow you to produce music with your computer. This includes the creation of melodies and beats, the synthesis and mixing of sounds, and arranging of samples. You can have fun with your MIDI-keyboard and much more; all in a user-friendly and modern interface.

I am currently working with the guys behind the scenes on this, to bring a brand spanking new User Interface, which should bring it to the front of the current DAW U.I market, also with all the new features and workflow overhaul, this should be a an amazing piece of music software… keep your eyes peeled.

Very impressive! Small world 🙂 Keep us posted on any updates and we’ll shout about them here. Any tips for Linux n00bs?