Just as consumers are increasingly purchasing their music in digital form, from online music stores like iTunes, Amazon and eMusic (a trend digital music distributors like us rely on for the future of our business), radio audiences are moving online. A study published recently by Bridge Rating, company that:

covering consumer use of satellite radio, Internet radio, MP3 players, Podcasting and mobile media consumption. They forecast that online ‘radio’ audience will grow to 77m by 2015. Their figures draw from both online only stations like Pandora and Yahoo Music, and simulcast stations (those that also broadcast over the airwaves) – see their graph for comparative growth rates. 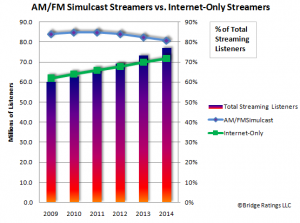 So why are users migrating? The cost of a radio is minimal, compared to the cost of a computer, or even to a broadband subscription, and anywhere you can pick up the internet, you can pick up an FM signal. If it were the case that people were just using their computers as a convenient method of accessing the radio content, because their speakers are hooked up to it, signal is poor or they’re out of range, then simulcast stations wouldn’t be seeing a stagnation of or negative growth. Instead it seems likely that users are usign alternative music streaming services becaused of the greater interactivity and enhaned services like forums and playlist sharing that surround the musical core  of the online channels, just as they surround music stores like Spotify (which runs it’s own nascent radio platform). If it is this rather than the inherent quality of the radio content itself that is drawing users online, then what does the future hold for premium airwave radio providers like Sirius XM? Will their hold on the car dashboard be enough to save them from their competitors? Not if Pandora have anything to do with it, as their contract with Ford to build in-dash controls to interact with their service shows. The increasing prevalence of smart phones and mobile internet devices also means that anyone with a stereo jack cable can use their existing car stereo to access their own music collection and playlists.