The IFPI have released their report on the digital music market in 2009, a mixture of summary, opinion and statistics covering general developments in the online media market over the last year. Some highlights include interviews with the CEO’s of Spotify and the newly launched Sky Music, and some top line stats on the growth of the music market and it’s struggle with online piracy. 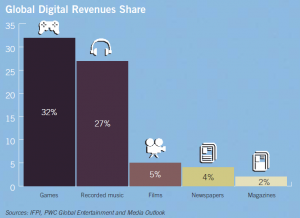 One of the more striking graphs they’ve published illustrates just how big a pie the music market remains, second only to the computer games industry in terms of digital revenues. Perhaps the music market could take cues from the games industry, which has two distinct models of revenue generation – premium products for sale with heavy DRM protection (facilitated by the increasing online elements of gaming) and free, ad supported casual gaming sites providing access to less spectacular, but almost unlimited content.