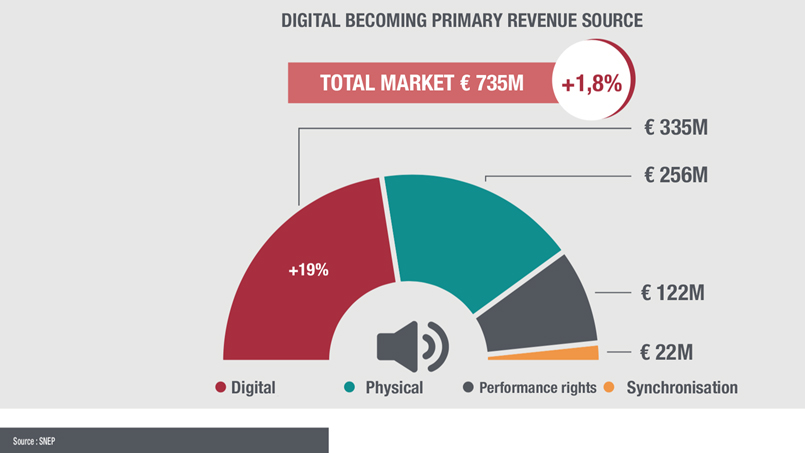 CDs are becoming a thing of the past as more and more each year digital music replaces the way we used to listen.

France certainly aren’t strangers to music online, being the homeland of popular music streaming service Deezer. Their love for music streaming and downloads means that digital music is now worth more than their entire physical market of CDs, vinyls and all other music you get in a shop.

The latest figures from the SNEP show that for the music industry, digital revenues now account for 57% of the market (€335 million). The entire recorded music market grew by 1.8% in 2018, their 3rd year of growth in a row.

Physical music still makes up a large chunk of the industry in France, CDs represent over a third of all music revenues in France. The physical market made $265 million for the year, still a significant amount but a lot less than digital.

The SNEP say that despite the shift in platforms, physical music is still doing better in France than in many other places that are switching to digital music. They say this is thanks to a “unique distribution network of more than 4,000 sales outlets across French territory”.

Whilst overall market growth was good, at 1.8%, it is music streaming where the growth is really happening. Both free and Premium streaming revenues grew by 23% with paid subscriptions making up 41% of the income. That’s incredible growth for paid streaming which only accounted for 8% five years ago.

There were 57.7 billion audio streams recorded by the people of France in 2018. That’s up 35% on the prior year. Weekly listening figures peaked at 1.3 billion at the end of December.

SNEP’s general manager, Alexandre Lasch says: “In a recovering market, we are particularly proud of the spectacular success of the Made in France artists, who featured in 19 of the 20 best-selling albums of 2018, as well as 80% of the Top 200.

“Record producers are hardwired to discover and accompany artists in their careers. One very significant performance indicator in 2018 which highlighted their commitment was the wealth of new talent in the best-performing albums of the year: out of the top 200 best-selling albums of last year, 48 were debut albums, 40 of which were produced in France.”