Dato DUO is half synth, half sequencer that’s made to be played by 2 people of any age.

Have you ever wanted to play the same instrument as someone else, at the same time? With Dato DUO you can do just that as it’s a customisable synth with a sequencer that’s unique sound is built upon collaboration.

Dato DUO has been designed to be used by 2 people but it’s also been created to be simple enough for anyone to use, hence it’s age tag of 3-99. DUO’s developers, Dato, wrote: “We believe synthesizers are too much fun to be left to grown-ups alone. But existing synthesizers are often too complicated or precious to be used by kids. Also, jamming with each other is better than making music alone.”

Creator’s Dato have launched a Kickstarter campaign to raise the funding required to build the DUO. They began building it last December and have been perfecting and user-testing it ever since. So how does DUO work?

The DUO’s main side features it’s sequencer where users can create melodies with it’s pentatonic buttons. The circular sequencer will loop the last 8 notes played, which you can edit the sound and melody of with controls for speed, note length & velocity, pitch, and turn notes on and off. 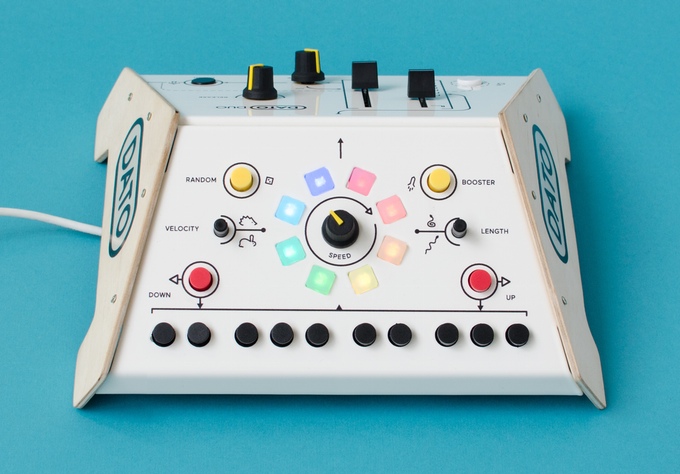 The other side features the synthesizer where the other person can control two sliders that control DUO’s 2 digital oscillators and the filter-cutoff frequency. There’s also a release and resonance slider to more affect the sound. There are then two buttons, ‘CRUSH’ and ‘POW!’ each of which produce their own sound, one a percussive burst of noise and the other an ‘aggressive bit crusher effect’. 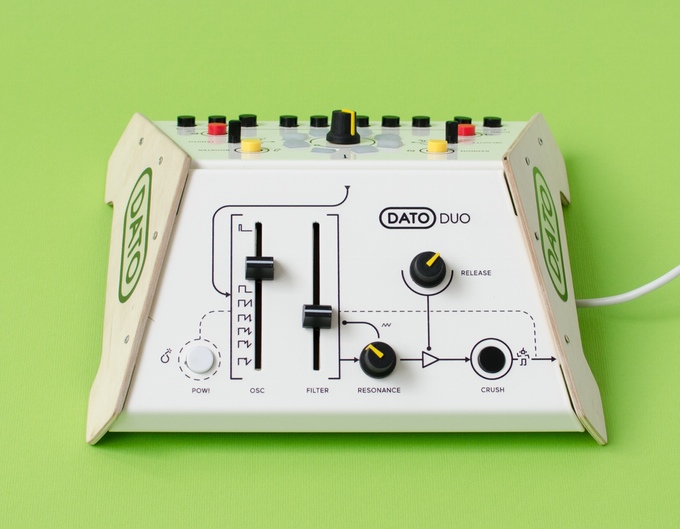 Dato DUO’s awesome features don’t end there as you can also hook it up to external effects, like guitar pedals, and use it’s sync input and output to work with devices like the Korg Volca and pocket operators.

DUO has been designed to be intuitive and easy to pick up, no matter what age you are. There’s no screen to complicate things with a UI, and playing it doesn’t require any musical knowledge – it’s all about experimentation and the sounds you can create with it. And there are few instruments that give you the opportunity to play at the same time as a friend.

You can get a Dato DUO from their Kickstarter right now at a limited, early bird price of €269. (Planned to ship next April)