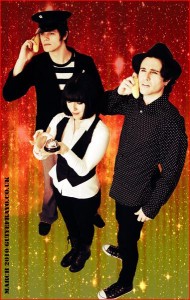 This week I’ve found myself a little confused by the E.P I’m reviewing – I can’t work out if it’s a real or not.

Psychedelic Outer Space Dance is Guiye Frayo’s fourth release, although I have to admit I’d never heard of them until earlier on this week. Apparently they are quite well known on “the scene”.

The band describes the E.P on their website thusly; “After several months of experimentation digging into funk, electronica and dance sounds we come up with a bunch of songs that will make you crash the mirror ball on the dance floor as we crashed ours with our spaceship” – this seems a bit of a desperate attempt to appear funky, from a band that sounds more like the Human League if the song writing were terrible rather than Galactic.

The E.P is thankfully very short, however Guiye Frayo have managed to double it in length by inexplicably whacking instrumental versions of the 3 songs at the end, I’ll come back to these later.

The E.P opens rather obnoxiously with a song called ‘Swimming’. The first thing you will hear is very stereotypical ‘funk guitar’, that screams “we’re trying to be funky, look at how funky we are” . The song evolves very unsubtly with basically no memorable moments other than a hilariously desperate “funk-breakdown” at the end of the song. The vocals are hard to make out and seem to have no relationship with the far too busy music.

The second track ‘London Pulse’ has a far too long introduction that insultingly sounds not dissimilar to something that the brilliant Parliament/Funkadelic might have opened a live show with. Guiye Frayo then go on to follow this with a three minutes or so of gloomy dross that doesn’t evolve at all.  I did enjoy that every time the lyric “London Pulse” appears the voice has been so heavily effected it sounded like “London Balls”, but not worth listening to the song just for that.

The final song ‘Fast Forward’ is by some distance the best track on the E.P. The vocals sound (in parts) as though they belong on top of the music and the song has a fairly solid structure with memorable hooks. There is an excellent break just before the second verse where most of instruments seem to actually interact with each other for the first time on the E.P.

So, the three songs done. Now we have the small matter of the ‘instrumentals’ to deal with. I really don’t understand why these are present at the end of the record. There wasn’t a single moment in any of the three songs that I was so blown away by the music I thought “my my, this is simply sublime! You know, I wouldn’t mind hearing all of these intricacies without the vocals in the way, so I can give them the attention they deserve”.
It strikes me as being very arrogant, putting instrumental versions of your songs at the end of an album. It assumes so much of the listener and even more of yourself. I also don’t understand why this has been done. I mean, admittedly in the case of the first 2 songs an absence of vocals is a minor improvement, but why were the vocals there in the first place? I can only assume that the vocals were included after the music had been written as a desperate attempt to provide a main focal point, but in doing so just added to this boring, overly complicated music with pointless, badly performed vocal tripe. They are not the only band guilty of doing this, and two very successful bands, both of whom I like (Biffy Clyro and Battles) could be accused of doing the same thing, although, both of these at least make moderately interesting music…

Anyway, I’m still none the wiser as to what the E.P is supposed to be, or if it’s a joke. I suppose I could try to learn more about the band by listening to their back catalouge and find out for myself, but, if it is a joke, I’m not sure it’s a funny enough one to waste my time on.

It’s certainly an experience and if you would like to know a little bit more about what I’m talking about, you can get the E.P from iTunes by clicking here or you can visit the band’s website here.