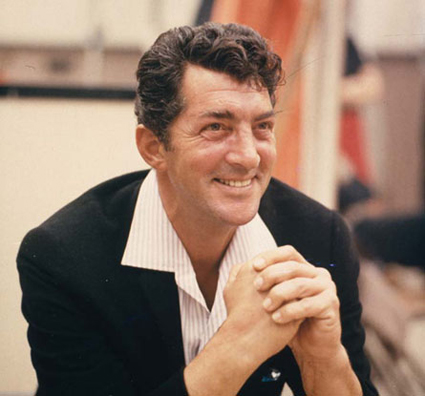 February the 17th saw the hugely sucsessful Dean Martin with surprisingly, his only ever UK number one. With “Memories Are Made Of This”, Written by Terry Gilkyson, Richard Dehr and Frank Miller, Dean enjoyed one month in the UK top spot.

Terry Gilkyson’s daughter Eliza spoke of her dad, “He always hated people finding hidden meanings an metaphors in his songs, because he just did it as a job. He went to the office everyday and just wrote songs. But “Memories Are Made Of This” was an exception, its about us: its about him meeting my mother and having three kids. He’s left us a wonderful legacy. At the time everything dad was writing was turning to gold”.

On the other hand Dean Martin was going through hell in 1956. His marriage was on the rocks and his hugely successful comedy duo with Jerry Lewis was just about over. He told Gilkyson that “Memories Are Made Of This” was awful as far as he was concerned so they recorded it anyway. He recorded it with “The Easy Riders”, a group containing Gilkyson co-writers, Richard Dehr and Fran Miller.

The single topped the US chart for 6 weeks, with a cover version of the song, Gale Storm, reaching number 5 simultaneously. The only whiff of a snip of any real competition in the UK came from television comedian Dave King, whose own version of the song also only reached number 5. The song again made the top 20 in the UK when it was revived by Val Doonican in 1967.

Hey, at least i found your blog it’s excellent and information is unequal and This song is awesome whitney houston i wanna dance with somebody

Hey pallies, thanks ever so much for liftin’ of the name of our Dino and sharin’ this important note of Dino-history with us of us who loves our Dino. Cool to know that our great man kept the numero uno spot for a whole month and the details ’bout how our Dino really felt ’bout the memories song. Never was, never will be anyone as cool as the King of Cool….oh, to return to the days when Dino walked the earth……