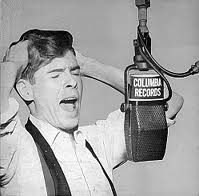 Johnny Ray’s “Just Walkin’ In The Rain”, written by Johnny Bragg and Robert Riley, was number for at the time a record 7 weeks, starting the week beginning November 16th 1956. And the story behind it is equally amazing.

Johnny was born blind only to have his sight reveal itself to him when he was six years old. He was a tad wild while we was growing up and was, according to the local community at the time, stitched up by the police. Astonishingly he was accused of six separate rapes, each earning him a 99 year sentence and was sent to prison in Tenessee.

The Tennessee state State Prison is reported to be a vicious institution and he was occasionally beaten unconscious, until in 1953 a new warden brought about reforms and encouraged the inmates to form a band, The Prisonairres. They were to be booked for local functions and although it might be assumed that audiences would stay away. But it was exciting to go and see three murders a rapists and a thief with a following of armed guards! The crowds turned up.

The story goes that Bragg and Riley were walking across the courtyard in the prison campus on their way to the laundry room when Bragg says, “Look, here we are just walking in the rain and wondering what the girls are doing”. That was the magic. Riley decided that was a song and within ten minute had written the first two verse, the writing duo was created, he was illiterate and in exchange for Riley writing it for him he promised him credit. It became the first big hit for Sun Records in Memphis and, despite not being able to tour too much, made it to the top of the R&B chart.

The producer for US Columbia, Mitch Miler caught wind of the song and decided that it would be a hit for for Johnnie Ray. It was given a full orchestral accompaniment and became the No. hit we know today.

7 Pop Music artists on our new music radar for 2021

7 emerging artists making new pop music to get excited about in 2021.

Keep an eye on these new artists refreshing the indie rock scene in 2021.