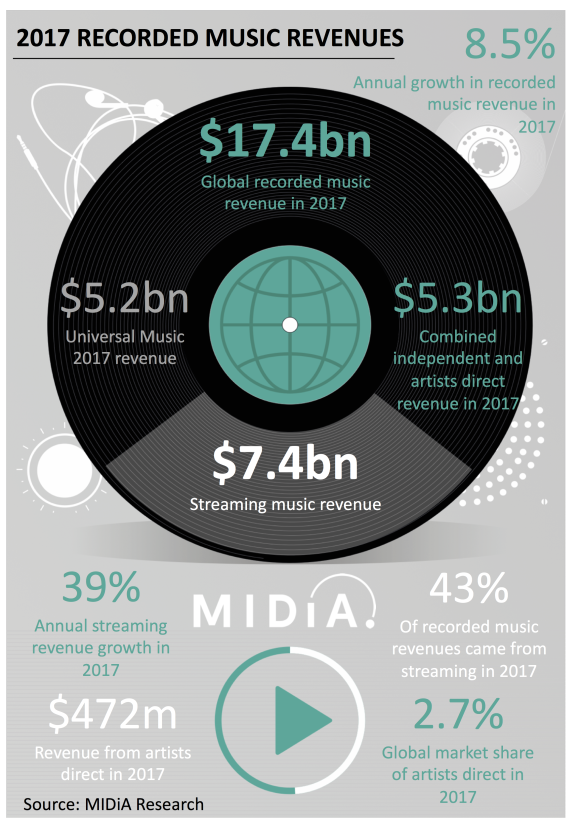 The latest report from Midia Research shows a monumental year of growth for the worldwide music industry last year. Global recorded music revenues in 2017 reached $17.4 billion, up from $16 billion in 2016 which represents 8.5% of annual growth and $1.4 billion for the year.

This continues a trend of continuous growth within the music industry in recent years, aided massively by the giant rise in music streaming. This resurgence in music revenues follows around 20 years of declines in profits but with last years growth music industry revenues are just slightly below where they were 10 years ago in 2008 ($17.7 billion).

Midia’s report show that streaming is growing 39% year-on-year, adding a whopping $2.1 billion in revenues for a total of $7.4 billion in streaming revenues worldwide. Streaming revenue is so large that it now makes up almost half of the total industry revenues, representing 43% of the global industry’s earnings.

On the other hand physical music (ie. CDs) and digital download sales have been dropping, with a decline of $783 million in 2017. Fortunately the success of music streaming is heavily offsetting that reduction. Whilst CDs continue to plummet not all physical music is in dire straits as vinyl record sales continue to soar upwards as the format finds new life in collectors and hipsters alike – and genuine music lovers too.

Our favourite section of the report shows that label-less music is booming. Independent music was the fastest growing section of the music industry with 27.2% year-on-year growth for music going directly through distributors like RouteNote and independent platforms like Bandcamp. Revenues for artists without a label representing/managing them have been properly included for the first time in a global recorded music revenues report as their collective earnings now stand at almost half a billion dollars.

For 2017 independent labels and artists represented 30.3% of the global recorded music revenues. Whilst major labels still have a strong grip on the industry, more and more people are realising the opportunities available without a big record label. We can see in pop culture today the dramatic difference in how artists are getting famous and releasing their music, whereas just 10-20 years ago you’d be unlikely to hear of anyone not signed to a major without going underground.

Independent music is making it’s mark, and you can too by getting your music on to all the top stores and streaming services online completely for free – and no-one takes ownership over your music but you.

Find out more at www.routenote.com.