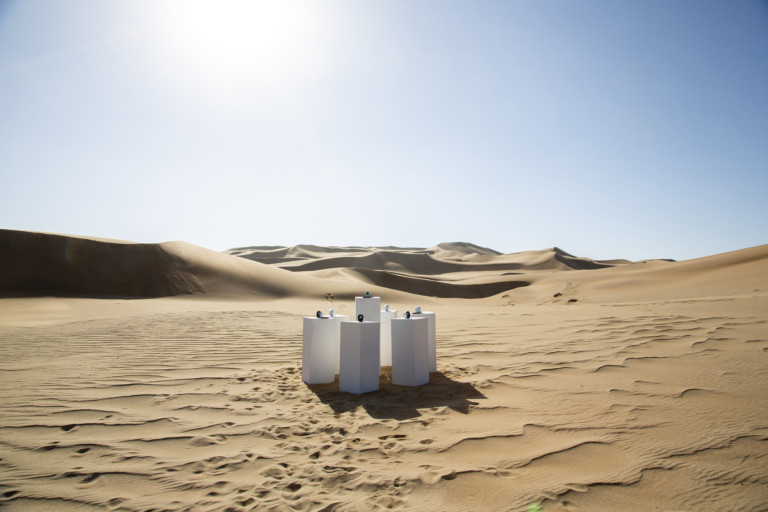 Toto’s beloved track Africa, even more beloved in recent years thanks to being heavily memed, is getting paid tribute to with a non-stop loop ‘for all eternity’ in the Namib desert.

Namibian-German artist Max Siedentopf has set up what is both an art installation and also a very unique tribute to Toto with six speakers in the Namib coastal desert that will play the band’s hit song Africa on an endless loop. The installation has been planted in an undisclosed spot where, running off of solar batteries, the speakers can “keep Toto going going for all eternity”.

The speakers and solitary, blue MP3 player – which only features Toto’s Africa in it’s library – sit atop white rectangular blocks amongst an endless sea of desert surrounding it. It looks incredibly peaceful and slightly lonely, with the sound of Toto’s Africa a constant in the expanse of emptiness that is the dunes of the Namib desert.

The song itself is a funny shout-out to Africa that Jeff Porcaro, Toto drummer and the song’s co-writer, described as “a white boy trying to write a song on Africa, but since he’s never been there, he can only tell what he’s seen on TV or remembers in the past”. The artist, Siedentopf says the song is worthy of tribute in the continent it’s based on because it’s “a song that is understood and liked all over the world”.

He goes on to say: “If no one hates it, no one will love it. I think having the worst sound installation is more interesting than just a mediocre installation.” Whilst the location of the installation has been left undefined Siedentopf has put a map on his website with a red circle over the 1,200 mile desert to narrow it down – making it purposefully vague. He writes: “I’m not too worried that someone will put it in jeopardy. Finding it might take some time.”