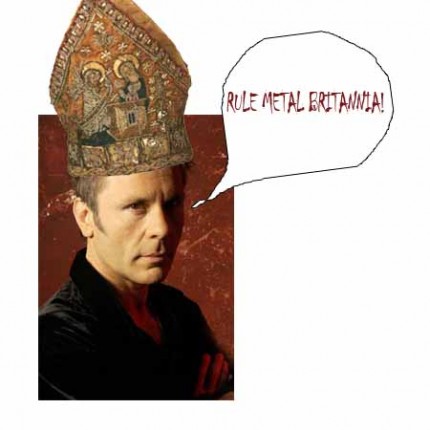 Metal Hammer magazine have decided to start a campaign in the form of having Heavy-Metal recognised as a religion ahead of the 2011 ‘sensus’ report much in the same way that Jedi has been.

At the last sensus, which occurs every 10 years, 390,127 people in England & Wales and a further 14,052 in Scotland stated ‘Jedi’ as their religion thanks to an enormous internet campaign. Which as a result eventually saw it as the forth biggest religion in the survey, behind Christianity, Islam and Hinduism.

Metal Hammer editor Alexander Milas said: “Ever since Black Sabbath made their debut 40 years ago heavy metal has grown to become one of the  UK’s most significant cultural institutions, and a global phenomenon. Hell, if the Jedi can do it, why can’t metalheads? The force is strong in us.”

Biff Byford, lead singer of Saxon and veteran metaler has official agreed to become ambassador of the movement and more than qualifies for the role. Metal Hammer are encouraging fans to email them and make public which bands and musicians you think are worthy of prestigious positions within the Church Of Heavy Metal. Which towns, cities or other places do you think should have the honour as integral parts of the “Metal Britannia” Religion over the coming months? Let them know emailing them at metalbritannia@metalhammer.co.uk. RouteNote have gone for Ozzy Obsorne, Lemmy as men of the cloth, with Bruce Dickinson as Pope!