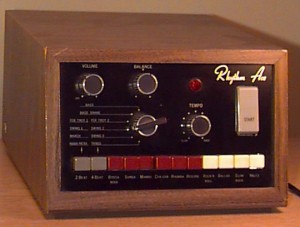 Everyone seems to be deriding Microsoft’s new Songsmith program, and with very good reason.  Mr. Gates’ employees seem to have decided it would be a good idea to take the software from a circa 1985 toy keyboard and box it up for $30.  We’ve got a Rhythm Ace attached to a Hammond organ downstairs that was designed in about 1960 and does a more convincing job.

You have a battery of switches to adjust tempo, mood, instruments etc. which the program uses to create music that is as bland as it is unoriginal. It’s as though someone at Redmond distilled Mike Flowers Pops to remove all the personality, and then digitised it. There’s a huge swathe of ‘remix’ videos up on YouTube, but my personal favourite is the Weezer – Buddy Holly remix. It’s the only one that I could actually listen to all the way through.

For sheer comedy value, none of the remixed songs beats the advert that supports the program. It’s literally incredible. This has been produced by a company with revenues of $60 BILLION dollars! How can they possibly think it’s ok to release utter guff like this? How did they spend the marketing budget, farming gold on WOW or something?

“I don’t want to write another boring love song”, yes… It’s much easier to have a robot do it for you. I get the feeling that having failed to make anything happen with their Pandora project, they’re looking around for other quick ways to offset all the money they spent on researching it. Thanks guys, good customer service – I wonder if there are any jobs going at Google? You remember, those guys who took your office software, improved it and made it free?

It’s really crazy how they spent time and energy and money to tell people it would revolutionize recording and music making.

Reply
Pingback: You'll never guess who might be making a new DAW, at last! - RouteNote Blog