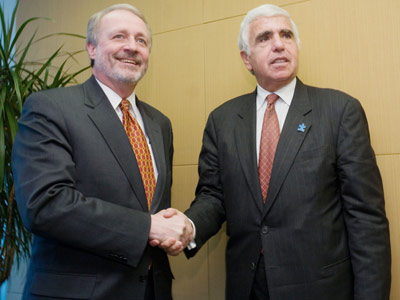 XM founder Gary Parsons is out as chairman at Sirius XM radio, bringing the company in line with Nasdaq rules about independent board members. LA Times publisher and CEO Eddy W. Hartenstein replaces him as non-executive chairman.

“I could not be more proud of everything that has been accomplished in satellite radio,” said Gary Parsons. “It has been a true honor to serve the stockholders of these companies since founding through delivery of an unparallel service to millions of loyal and devoted subscribers. While it has been a privilege to serve SIRIUS XM as Chairman and to have guided the company successfully through the merger of SIRIUS and XM, I believe now is the right time to step aside. As SIRIUS XM, we have achieved significant synergies while bringing together two incredibly talented teams and unique service offerings. Moreover, despite the challenging economic environment, we have begun to generate positive cash flow and have substantially improved our financial condition. While challenges remain, I’m confident that under the direction of Mel Karmazin and with the assistance of Eddy Hartenstein, SIRIUS XM will continue to grow and flourish.”

More from the AP:

NEW YORK (AP) — Sirius XM Radio said Thursday that Gary Parsons has resigned as chairman and a member of the board and will be succeeded by Los Angeles Times publisher and CEO Eddy W. Hartenstein as non-executive chairman.

Parsons founded XM Satellite Radio and was its chairman before the company’s merger with Sirius. His replacement with an outside director brings the company in line with Nasdaq Stock Market rules on independent board members.

In a statement issued by the company, Parsons said “now is the right time to step aside,” following the merger of Sirius and XM. He said he was proud “of everything that has been accomplished in satellite radio.”
Parsons said the combined company has begun to generate cash flow and improve its financial health despite the economic downturn. He did not indicate any future plans.

CEO Mel Karmazin said Parsons was a pioneer who steered the company in the right direction including the merger.

Hartenstein was a director of XM Satellite Radio Holdings Inc. and has been served on the Sirius XM board since July 2008. The former DirecTV chairman and CEO became the Times’ publisher in August 2008.

Sirius shares closed at 66 cents. Which is still a long way of the $1.00 they need to stay on the Nasdaq.