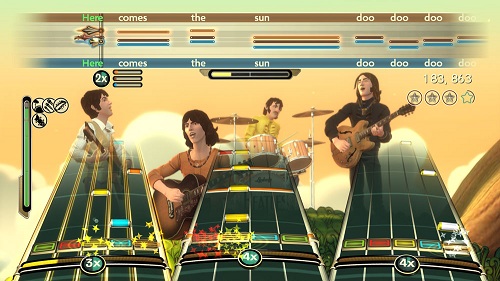 Harmonix who are the makers of The Beatles: Rock Band and of course the original Rock Band are soon be releasing the new Rock Band 3. So far there has been a lot of talk that users are slowly getting a little bit bored of the games, because they cant see how Harmonix can beat The Beatles Rock Band game.

Dhani Harrison, son of Beatles‘ George Harrison has let a little secret slip out as most musicians do during interviews, whether it’s on purpose or not.

According to an interview with the Chicago Tribune, Harrison (who also helped develop The Beatles: Rock Band) shared the fact that Rock Band 3 may be more than just a game to scratch the surface of the brain. Rock Band 3 may actually teach non-musicians how to play real instruments!

We’ve all played Guitar Hero before. They’re just a bunch of buttons you have to click in synchronization with what you see on the screen. Rock Band 3 will somehow go beyond that since Harrison states:

“I’m workin on […] making the controllers more real so people can actually learn how to play music while playing the game. […] Give me a couple years, it’s going to happen.”

This may also explain why Scott Guthrie told IGN that the Rock Band empire was in for some drastic changes:

“We aren’t standing still – we will keep moving into new areas and look at new technologies that our platform holder partners are also developing, such as Project Natal from Microsoft.”

Don’t expect a new tracklist to be your final news for Rock Band 3. If they actually pull this off, it might take a lot longer and be a lot harder.

DJ Mode is a new on-demand listening experience from the music streaming service, launching with their first host Billie Eilish.

Interesting that this has nearly come full circle? I recall reading about the initial prototypes, how players were allowed to ‘make up’ bits of stuff as they played.

There are currently a few prototypes (like Maestro Laser Guitar Trainer) that show players where to place one’s fingers on a guitar neck so I could see how the transition can be made smoother between Rock Band guitar to a real one (or other instrument!)

Guitar is not too complicated of an instrument, in essence its a 2×4 with some strings. I could see something like a digital keyboard. Or a cheapo-100$ guitar which plugs into the xbox through some intermediary. There’s a few ways to go about it I could think of

Hmm. Perhaps it could, oh I don’t know… monitor the noise!?!