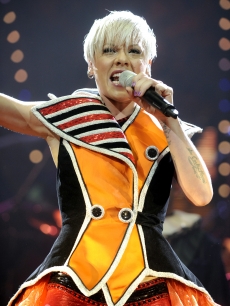 Police say that the tour bus of pop singer Pink caught fire on its way from Munich to Berlin. Bavarian police say a particle filter in the exhaust system caught fire at about 5 a.m. Monday (June 7) due to a technical defect.

They say the driver reacted quickly and got the bus to the side of the highway and put the fire out with an extinguisher before authorities arrived at the scene. Police say eight musicians were aboard but Pink herself was not. Boring! Would have given Pink some good material for her next album!