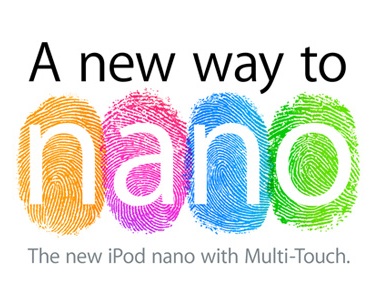 Just a quick post for those of you who missed yesterday’s Apple news because you live in a cave on the moon or somewhere beneath the ocean – here are the most exciting bits from the keynote;

1) iPod Shuffle – not much new to say here. They have returned to the clip design which I approve of. The voice over feature might be useful; this will say the name of the song, album or playlist to you so you know roughly where in your playlist you are. This has been a genuine problem with previous shuffles. £39 for 2gb is excellent value for money.

2) iPod Touch – consistently the most underwhelming of the iPod range. This new version has made a move inline with the iPhone 4, as was probably to be expected. HD video recording, front facing camera allowing for ‘FaceTime’ blah blah blah. It’s not that I don’t think this is a great product, I do, it’s just that the entry level 8gb model is £189. For that price you could just get an iPhone 4 and have the same product as your mobile phone.

3) Apple TV – you’ve got to give it to Steve Jobs, the guy is persistent. After years of trying to make Apple TV work they are still grinding away. Here is the latest redesign/revamp of the service. I really want this to work and think that the Movie rental feature will be key to its success. Call me a capitalist if you will, but a way to monetize the online video market is something the media has been in desperate need of for years. I will be buying it, I suggest you do the same.

4) iPod Nano – this 6th generation of the iPod Nano has taken my first place award as the best announcement of last night. A brilliant multi-touch screen on a device that clips to your jacket is inspired. If I didn’t already own an iPhone 4 this would be the iPod for me. At £129 for the basic 8gb I think that these will sell quicker than any of the other new announcements. Watch the video below for full details.