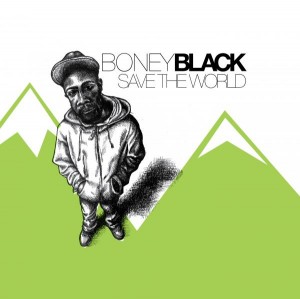 It depresses me how often the adjective ’embarrassing’ is applicable to British Hip-Hop. Don’t get me wrong, it’s also applicable to a lot of American Hip-Hop too, take that deluded bell-end 50 Cent for example; his rapping was bad enough but now genuinely believes he’s an author. The problem British Hip-Hop artists have however, is that they can’t wear the cliches of Hip-Hop as well as their American counterparts can.

Hip-Hop is a borrowed culture, we don’t have the same gang or crime culture as America and as soon as a British rapper tries to talk about these issues they run the risk of sounding at best totally disingenuous and at worst laughably ridiculous.

Save The World is the debut E.P from Preston based rapper Boney Black. It is an E.P full of legitimate character and personality that doesn’t feel in anyway produced by formula.

The opening and title track ‘Save The World’ is a perfect way to begin a record that deals with bleak and gritty topics. The song dynamically doesn’t move a great deal whilst the lyrics acknowledge everything that Boney Black feels should be acknowledge before taking us into the rest of the E.P. The track’s message is one of optimism, which sets the scene perfectly for what is to follow.

The quality is honestly sky high throughout and picking 2 or 3 stand out tracks is no easy task. The second song ‘She can’t cope’ – an extremely bleak story of single mother and ‘Solja Boy’ are probably the two best stand alone songs, but inside the context of the record are even stronger.

The production is absolutely pitch perfect and musically sounds as though it was written to accompany the lyrics rather than working independently, as is the case with so much inferior Hip-Hop.

I’m not usually a fan of anyone whose lyrics are this boastful, I don’t think he’s by any stretch of the imagination a world class lyricist and at times the relentless repetition of certain lyrics annoyed the hell out of me. Boney Black has something about him though, something that made me feel warm inside and made me like him a great deal. I think he genuinely cares about all of the subject matters dealt with on this E.P and his lyrics offer a real insight into the intimate details of his life and the inner workings of his mind.

The record can be purchased here and you can visit Boney Black’s myspace page by clicking here.

If you would like to be reviewed then please get in touch; luke@routenote.com or @monkeyhotel

How To Add Your Own Music To Spotify

So, you’ve got your music recorded and finalised and now you’re probably thinking “how do I add my music to Spotify”, let us help you!

Sony Music Publishing takes home publisher of the year at the BMI’s for the fourth consecutive year.