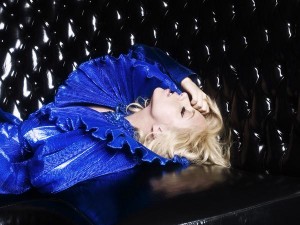 Even though we don’t do her digital music distribution, we still love Lady Gaga. She’s every bit as much of a paragon for the new music industry as Radiohead and Trent Reznor, as a long article on the Wall Street Journal, in which they extol her virtuosity at replacing the ‘lost’ revenue from the music she gives away with other sources of income: touring, licensing, make-up endorsement deals…

An interesting point made in the article is that:

…much of Gaga’s audience got her music for free, and legally. They have listened to free streams—by the hundreds of millions—on YouTube and the other online services that Gaga currently leads, according to research firm BigChampagne. On MySpace, Gaga has had 321.5 million plays. By contrast, singer Susan Boyle tallied only 133,000 plays, despite scoring the No. 2 selling album of 2009. A difference (among many) between Gaga and the dowdy Scotswoman discovered on a British talent show: Ms. Boyle’s material, including “Amazing Grace,” was traditional—and so were most of her buyers. Some 97% of her albums were sold on compact disc.

This really underlines the generation gap between Gaga and Boyle, which points at a larger truth – while it is still possible to have enourmous commercial success through the traditional routes, Boyle’s fame being delivered mostly through the TV and her sales being on CD, this market will be dwindling with time. Young consumers are more used to getting their music online and for free.

Whilst a tumultuous and difficult year for so many, 2020 saw remarkable growth for UK Music as the resurgence in music revenues continues.