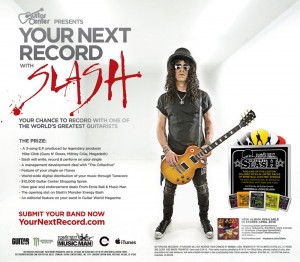 In a competition that opened on the 1st, Guitar Center is offering the chance to have Guns n’ Roses Slash write, record and perform on a 3 track EP with you. The prize is more than that:

·      A 3-song E.P. produced by legendary producer Mike Clink (Guns N’ Roses, Megadeth, Mötley Crüe)
·     Slash will write, record and perform on your single
·     A management development deal with “The Collective” (the team behind Linkin Park, Slash & Avenged Sevenfold)
·     Feature of your single on iTunes
·     World-wide digital distribution of your music through Tunecore
·     $10,000 Guitar Center shopping spree
·     $10,000 in new gear and endorsement deals from Ernie Ball Music Man
·     The opening slot on Slash’s Monster Energy Bash
·     An editorial feature on your band in Guitar World magazine

Whether or not you think Slash will fit into your J-Pop band, or be able to enhance the sound of your folk band, the experience and connections of a man who’s been at the top of the music industry for the last 25 years is going to be invaluable, and the publicity generated from the win, let alone the efforts of the management team will push you into a new league. Submit your music through the competition website here. Just read that contract.

Please check out my profile on the http://www.yournextrecord.com/backstage/artist.php?artist_id=63568&audio_id=53404

and become a fan and vote for me. I posted up 4 songs for this contest: remember, cold inside, rest in your shining sun, and pull me closer