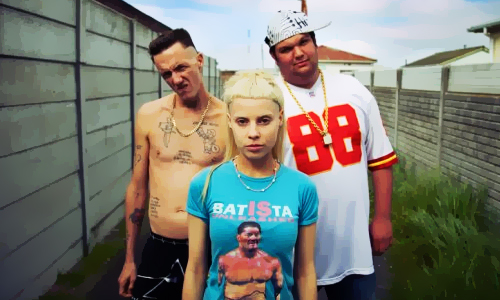 Die Antwoord, the South African group that has been everywhere lately has just signed to Interscope according to their website.

Although official reps for the band remain silent on the deal, a “guess what!?”” button on www.dieantwoord.com hosts a short film featuring Die Antwoord’s Ninja being tattooed with the characters “$O$.”

“$O$” is the title of Die Antwoord’s debut album, which has until recently only been available as a stream on the Cape Town-based group’s website, which had more than 15 million hits in the first three weeks of February alone. Videos for the group’s songs “Enter The Ninja” and “Zef Side” are closing in on 4 million views each on Youtube.

Following a March business trip to the U.S. at the invitation of Sony/ATV International – Die Antwoord has a deal with the music publisher’s South African office – and a 20-minute set at Coachella, fans have been waiting for news of the official release of “$O$”.

In the 44-second clip, Ninja arises from the tattoo table to show his back, while the message “23 track $O$ album dropping fokken soon on Interscope Records” appears on the screen. The streamed $O$ album has 17 tracks.