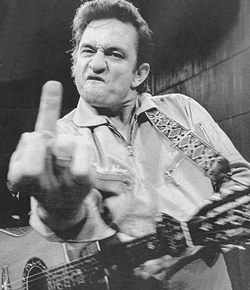 First things first; happy new year, all of you lovely, anonymous eyeballs. I hope you had at least a passable Christmas and have an uneventful 2011.

This Christmas we have seen Chuck Berry Collapse on stage, Matt Cardle inexplicably hold the number one spot for 3 weeks and Coldplay nearly ruin Christmas with that awful single appearing on every radio station and television channel virtually 24/7, and after all of that torture and sadness, you could probably do with some good news.

A new compilation of virtually everyone’s favourite American songwriter is to be released on February 22nd, and will feature 11 demos and 7 outtakes from Cash’s time at Sun records.

The cynics among you will probably agree with me that these tracks might have been previously unheard for a good reason, and selling copies by the million to Cash’s devoted fans whiffs a little bit of a record company walking on his grave to make some extra cash (sorry) from the great man’s memory. This won’t stop me from buying it though.

The track list for ‘Bootlegs 2: From Memphis to Hollywood’ is still to be confirmed and the release date is America only.