Winifred Atwell, who was born near Port Of Spain in Trinidad 1915, was a trained classical musician and traveled to the UK in 1946 with the desire and determination to become a concert Pianist.

Within a Year she had married a variety act agent named Lew Lewisohn and was quickly side tracked by, as well as 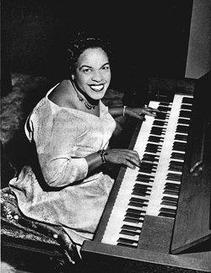 playing classical pieces, by a much different, fast growing following. Good ole knees-up mother brown sign-a-longs, that she played on what became known as her “other piano”. She wrote an enormously popular “Britannia Rag” for her set on the Royal Variety Performance 1952, and was back in the charts in 1953 with “Coronation Rag” (featured below) to join the celebrations for the new queen.

The song of topic though is “The Poor People Of Paris”, Winifred Atwell & Her Other Piano”. Produced by Hugh Mendl, the song became Number One on the week beginning 13 April and was on the top for three weeks. The Record was also covered by The Les Baxter Orchestra, who had success with the title in the US in the Number One position for 6 weeks. Winifred Atwell (by now known affectionately by her fan as Winnie) continued her brand of sign along community signing for the rest of the decade with songs like “Let’s Have A Party”, followed by “Lets Have Another Party”, “Lets Have A Ding Dong” then “Make It A Party”. All making the top 10 in some shape or form.

Realising that time’s were changing an Rock ‘n’ Roll was invading, the original Honky Tonk Winnie came up with “Let’s Rock And Roll”, before she mixed standards with skiffle’s in a sort of early version of today’s mash up’s on “Lets Have A Ball”. Winnie was finally squeezed out of the top ten UK charts by Russ Conway just after she emigrated to Australia, where she remained popular signing until her death in Sydney in1983.