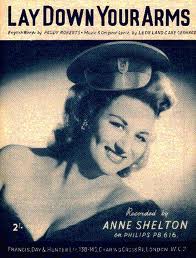 September 21 1956 Anne Shelton accompanied by Wally Scott and his Orchestra performing “Lay Down Your Arms”Enjoyed number one for four weeks. Put together by producer Johnny Franz with three writers behind him, Leon Land, Ake Gerhard and Paddy Roberts. Rare at the time. The song is considers quite inaugural in the way it was put together in the respect that many pop hits are now put together in much the same way. A writer creates a song, shows it to some producers, they audition some signers and put it together with the producers very much controlling its sound.

Similar to Vera Lynn, Anne Shelton, who’s real name is Pat Shelby, was an old army sweetheart during World War 2. With big songs prior to this like ‘Lili Marlene’ and ‘I’ll Be Seeing you’. Towards the end of the war, she met David Reid, who became something of an agent and eventually her husband.

Johnny came across the song thanks to David and thought it would be ideal for Anne who was quoted saying: “When Johnny Franz played it for me, I said I didn’t like it. It had a Swedish Lyric at the time, by Johnny said I’d change my mind once Paddy had finished the English. And I did.”

Originally the song was named “Ann-Caroline” and hit number one in Sweden just weeks before. Supposedly a true story about about a soldier returning from war to find his wife had another man! Written by Ake Gerhard, the lyrics anyway, and Leon Land helped with the music. The two became something of a magic couple, with everything they touched turning to gold. They wrote countless entries for the Euro-vision song contest and managed to success a band named “The Help Stars”, which featured a young Benny Andersson on keyboard, who later found worldwide fame with ABBA.