A portable speaker packing the power of a live rock gig and up to 30 hours of battery life makes the Rockster Air a seriously good speaker and a versatile PA you wouldn’t expect.

With the Rockster Air, Teufel have created a speaker rig that blows your expectations of what a portable Bluetooth speaker can do out of the water. A sleek and simple design contrasts it’s powerful sound which results in a speaker that can fill the biggest of rooms whilst never looking out of place. 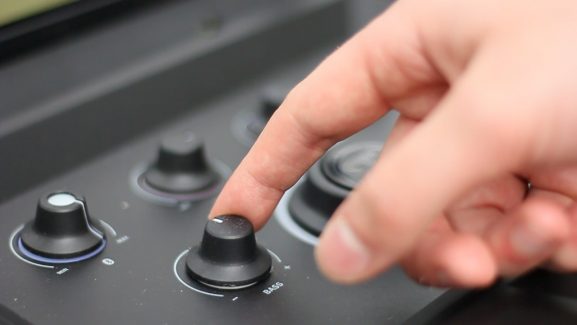 When you first get your hands on the Rockster Air you will immediately notice the minimal design that Teufel have gone for. You have your knobs on top controlling volume and EQ and on the back you have your inputs for plugging in your noise makers – and an interesting output which we’ll get to later. 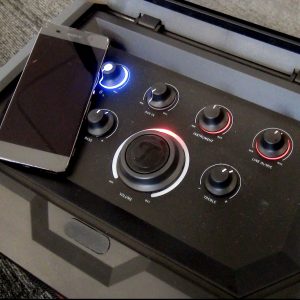 When you first turn the speaker on will light the LEDs which circle the speaker’s volume knobs. The red LEDs, blue for Bluetooth, lighting up the rig give you a visual indication of the gain for each input and the master volume. It doesn’t just look good but also means that you know what you’re doing no matter how dark it is, perfect for a big party or a vibey gig.

You have control over your master volume and the levels for the bass and treble which are both surprisingly versatile when it comes to getting your perfect EQ – and the bass from this speaker is always sublime whether pumped to the max or dipped for subtlety with 4 reflex tubes concentrating the sound coming from the giant woofer built into the Rockster Air. The speaker also comes with a remote so you can control the levels and EQ from afar. 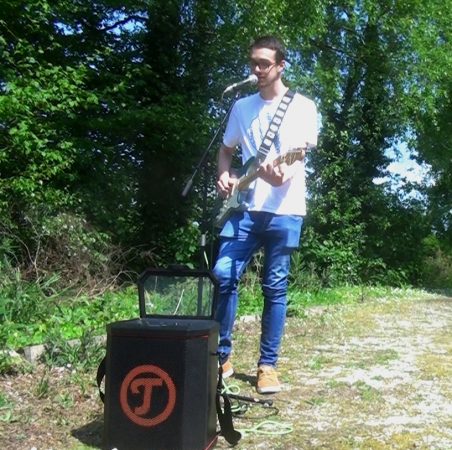 You’ll notice above the master volume are 4 independent volume switches for each input. These control each channels volume independently for streaming via Bluetooth, connecting through an aux cord, plugging in via 1/4 jack leads for instruments like guitars and keyboards, and it’s XLR input for microphones. You can use all connections at exactly the same time and get each input at exactly the level you want thanks to their individual volume controls. This makes it a perfect speaker for busking or playing small solo sets with instrument and mic inputs and the possibility to play backing tracks too through one rig.

Teufel’s Rockster Air also comes with a very cool function which allows you to output your audio to another PA or speaker, preferably another Rockster Air, and have them both play your audio inputs. What’s really great about this ability is that you can choose to select the Rockster as the left or right speaker and output the opposite channel for a true stereo sound – or just have them both play a mono signal.

The range of possibilities plugging into the Rockster Air combined with it’s incredibly powerful sound is what makes it so special – it’s totally versatile. With a battery that can last up to a whole 30 hours you can take it busking and plug in your microphone or your instrument and play all day with a powerful yet quality sound. You can take it partying and know that you have the power to keep pumping the tunes all night.

We even tried it out as a PA for a small gig in which it held it’s own alongside big guitar amps and bass cabs, cutting through with the raw sound with it’s power. Teufel’s Rockster Air has a big sound that retains it’s clarity even when turned up to the max, capable of sounds as loud as 112 dB which is equivalent to watching a live rock gig right in front of you. 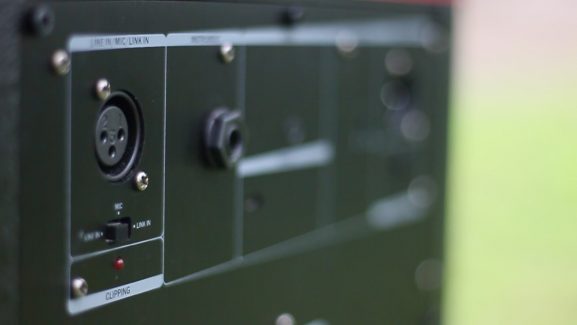 It’s not just the quality of sound and how loud it can go that makes the Rockster Air a brilliant speaker but it’s ability to send that sound through the space it’s in. To test the motion of it’s sound I put on some quiet ambient music on at a low volume, the sort of volume you would listen to music in the middle of the night. Then I walked out of the room and into another, and then another. I couldn’t believe the clarity with which I could still hear the sound, even 3 rooms away, when it was on so quietly.

The Rockster Air is big speaker and it’s giant sub isn’t going to make it easy to carry around, but with it’s hefty, reinforced shell you don’t have to worry about any dings and the included carry strap takes the weight off – a little bit anyway. I think that some built-in handles could have made a big difference to it’s portability considering a large part of it’s appeal is it’s long battery life for taking it out and moving around which could be made more convenient.

The only issue besides a lack of handles I’ve found whilst I’ve been using the Rockster was one of my first times using it and it wouldn’t turn off, turning straight back on every time. I eventually solved this by turning it on and off multiple times quickly so it wasn’t a big issue more of just an unexpected annoyance which thankfully never occurred again in my testing of the speaker

Teufel have created a pretty special speaker which combines simplicity with raw power and results in a rough and ready speaker which fits perfectly into various musical situations whether it be performance, listening to tunes, or absolutely going for it at a rave. With an incredible battery life and it’s versatility of uses it makes the perfect busking companion but will appeal to anyone looking for a giant sound that they can take with them.

It has been a strange year so far and Summer isn’t quite the same, but there still has be a definitive hit for the season regardless. Summer is upon us, even if we’re not getting…