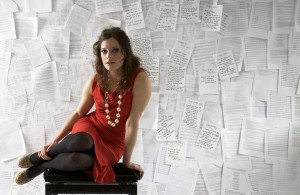 Jeni Saint’s sound is a modern take on the classic singer-songwriter mould. Inspired by the likes of Carole King, Karen Carpenter and Kate Bush, Jeni uncovers stories hidden in everyday life and gives them a soundtrack.

Classically trained on piano and cello, Jeni started composing in her early teens and won the BBC’s Song For Christmas competition at the age of 15. A prestigious gong, of which Gary Barlow is a previous winner!

Following a music degree at Oxford University, Jeni played her early songs on the London acoustic circuit at established venues such as The Troubadour, The 12-Bar and The Cobden Club.

She was one of the first acoustic artists to play at The Big Chill Festival with a solo voice and cello set. Jeni also performed on stage with Tom Middleton & Pete Lawrence and features on the Big Chill album, ‘Glisten’.

As a cellist, Jeni has appeared on tracks for Robbie Williams and Mutya Buena. She has arranged strings for Indie band Colour of Sound and Universal artist Elan Lea.

In 2003, Jeni decided to broaden her knowledge of the music industry and took a job as a TV plugger for Atlantic records. She helped to launch artists such as James Blunt, Sean Paul, Mark Ronson & Paolo Nutini amongst others.

Leaving London to focus on her own music, Jeni is now based down on the south coast.

VID LINK FOR ‘Life On A Wire’