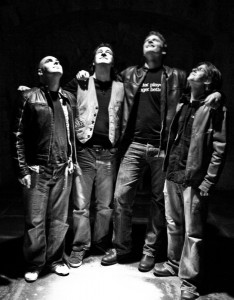 Bio: Hailing from the south coast of England in a blur of whiskey soaked rock n roll meet Jenna’s Revenge!

The band always give a frenetic live show that has seen them play alongside the likes of New Wave of British Heavy Metal legends “Tygers of Pan Tang”, controversial pop-punks “Towers of London”, friends of Iron Maiden “Voodoo Six”, the Myspace phenomena “Koopa”, and American guitar hero Adam Bomb.

Jenna’s Revenge aim to entertain and delight you and with song subjects ranging the full ambit from strippers to warfare all covered with tongue firmly in cheek we’re sure you’ll find something to tap your toes to!

Inspired by a wide range of influences from Extreme, Queen, Motley Crue and Skid Row to Rod Stewart, the Quireboys and the red hot chilli peppers, along with a list of other bands that could go on for several pages, Jenna’s Revenge set out to make music that we enjoy since there seemed to be a serious lack of bands around that were doing that for us!  Hopefully you’ll like what we do too as that’s pretty key to our plan for world domination succeeding…