Shazam have made a breakthrough announcement, revealing that their music recognition app has been downloaded more than 1 billion times and the company is finally profitable.

It’s been a long road for Shazam, the music recognition company founded almost 15 years ago in 2002. What started as a dial-up service that would text you the song titles and artist names has gone on to become an internationally recognised brand downloaded by 1/7th of the entire human population (depending how technically you look at it).

Shazam’s recent success mostly comes down to the launch of their smartphone app in 2008. Released for the Android and iOS Shazam’s app provided a revolutionary tool at the time. All of a sudden anyone with a smartphone could find out exactly what they were listening to, and they didn’t have to phone up to find out anymore. The app improved Shazam’s quality tenfold and expanded it’s audience beyond what they could have ever imagined.

After launching their breakthrough app Shazam reached 500 million downloads in 6 years. Shazam have managed to match that usership again in just the past two years, equating to 1 billion total downloads. Shazam’s executive chairman Andrew Fisher told Music Ally that they are now seeing 300 million users per year and 20 million every day.

Fisher continued: “It’s a very significant milestone in terms of our relationship with the music industry and the advertising industry. What we’re seeing today is that we’re delivering value both in terms of user engagement, but also data, and that’s playing a part in how we’re helping artists and advertisers engage with their consumers.”

As Shazam’s popularity increases so is it’s engagement with users, which Fisher says is “increasingly higher with the actual Shazam experience”. Over the years Shazam have built their app up to provide much more than the name to a song with discovery options, a feed of popular and recommended artists, not to mention the enhancements to the song detection itself which can now take you to your choice of store once recognised, and can even pick up on your humming to recognise songs.

Fisher added: “We are trying to give people more reasons to use Shazam, and more valuable experiences when they do use it. We’re working really hard to build on our heritage in music: we want to enrich the music experience, so we now have over 1,800 artists posting their own Shazam activity, and 3 billion followers of those profile.”

As Shazam’s app has catapulted into the mainstream in the past few years Shazam have seemed to peculiarly turn their focus towards advertising for other companies. Whilst advertising might not seem the most obvious direction to head in after music it makes sense thanks to Shazam’s unique platform and tech. Using ‘visual Shazams’ and various music promotions Shazam have managed to team up with giant brands like Coca-Cola and Hollywood films. 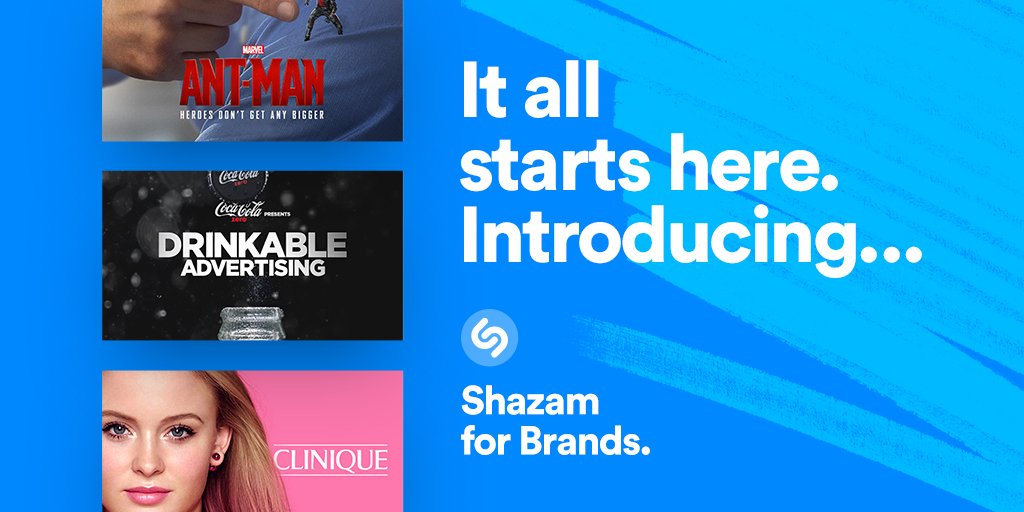 On ‘Shazam for Brands‘ Fisher said: “We are seeing continued interest, if not increasing interest, between brands and music as a way to engage consumers. We provide a very strong platform to help them with that.” Fisher insists that Shazam for Brands won’t distract them from their roots, saying: “Our heritage is in music. We have invested very heavily over the past 12 months in the music experience. We have integrated players from services like Spotify, and all these things contribute to greater engagement, more daily users, and giving people more great experiences. We’re still benefiting from virality as a result: people still talk about Shazam to their friends who haven’t installed it.”

You can buy tickets for upcoming concerts straight from Spotify now – with a few limitations.