Facebook have brought ‘Music Stories’, the feature that allows you to share snippets of tracks from various music stores and streaming services, to Facebook’s desktop version.

Early in November last month Facebook introduced a new feature on iOS devices that allowed you to share 30-second song snippets from Spotify, Apple Music and iTunes. Now six weeks later Facebook have brought the feature to the browser version of Facebook as well as adding compatibility from more music sources.

As well as Apple Music, iTunes and Spotify you can now share music previews from Deezer, Napster, Rhapsody, NPR and KKBOX. What’s better is that when you click on a music preview you can listen a stream as you continue scrolling through facebook and a small, unobtrusive player will appear so you can keep track of your listening. You can easily direct yourself to the store or streaming service from Music Stories. 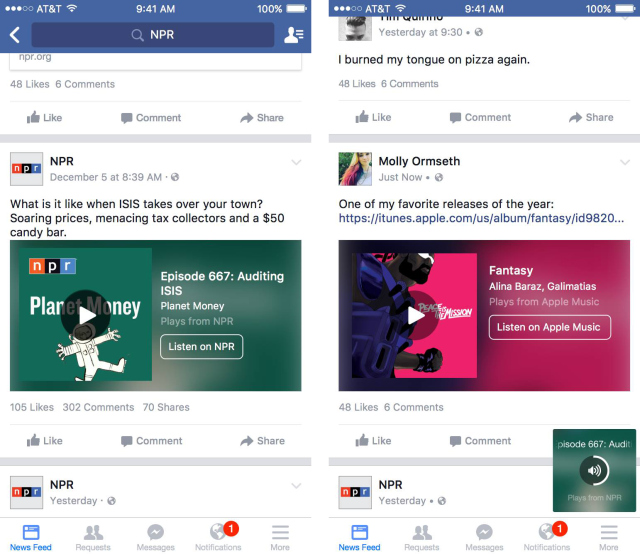 When they introduced the feature last month Michael Cerda, Facebook’s Director of Product, said: “There are few things people love more than music. People find out about it from artists and friends alike and they love to share their discoveries. We hope by making this experience better, artists will share more, friends will share and engage more, and music will become a better part of the Facebook experience overall.”

Sharing music with your friends, family and, for artists’, fans has never been easier. Facebook Music Stories will be rolling out to desktops today, Android compatibility is due to come in late January.

Apple have detailed updates coming to their podcast platform next week and plans for Apple Podcasts Subscriptions due in May.

The Hi-Fi music streaming race: Is HD audio the next big thing?

High definition music is quickly moving from a boutique service to a standard offering, so what does this mean for music streaming and listeners around the world?