No prizes for recognizing that logo, this is the biggest music store on the web. The store isn’t available using a normal web browser, only by installing Apple’s proprietory iTunes software, relentlessly updated to include more efficient ways of getting you to buy more content of different types, for every single one of your lovely Apple products.

Combined with the iPod, Apple’s online music store must be one of the biggest success stories on the net. They were surprisingly late on the scene; MP3’s were invented way back in 1991, eMusic’s first incarnation was born in 1998 , and the iTunes store didn’t go live until April 2003 (a year and a half after the iPod launched). Five years later, in April of ’08, iTunes overtook Wal-Mart to become the biggest music retailer in the USA, and was reported by Reuters as selling over 70% of all digital music worldwide. The IFPI calculated the global digital market as worth USD$3783.8 billion in 2008 – conflating these figures means the iTunes store turned over $2648.66 billion on music alone: by their own report, they sold 2 billion songs worldwide between January 15th 2008 and January 6th 2009 – OK, so the IFPI comparison gives them more than a dollar a track per sale, which isn’t the case, but the figures aren’t entirely disparate.

Here’s a breakdown (drawn from Apples published stats) of how music sales have accelerated for Apple over the last 6 and a bit years:

To save you the horror of another of my poorly structured Excel ’03 graphs – here’s one lifted from the very informative Wikipedia page that unfortunately only covers the trend up to 6billion tracks. (If anyone can recommend a better program for graphing, please tell me in the comments!) 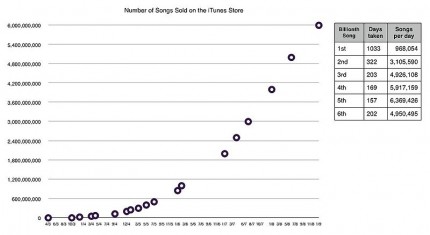 The success of their online proposition has been underpinned by the massive success of the iPod – over 218 million units have now been sold, meaning that the average iPod owner would only need to have bought 40 tracks from the iTunes store to account for all sales. That’s less than 4 albums worth each, and I think I probably have a few hundred albums in my collection.

Unless you’re a pretty hardcore nerd, you’ll be forced to manage your iPod through iTunes, and that shop is just so conveniently placed within the same piece of software that it’s easy to see how those track sales figures come about. Even accounting for a decent percentage of hardware failures, obsolescences and droppings into a pint of beer for those iPods out there (yes, I have had all of these happen), the iTunes captive audience (don’t forget all those iMac and Macbook users) is still 150 million strong and buying hard.

Track prices are relatively high, with occasional offers and a regular set of free sample downloads from artists promoting themselves. Apple users don’t seem to mind this, and it translates into pretty good profitability for artists selling through iTunes, 65% of the revenue from each sale is piped on down to the provider of the tracks sold, and there’s no variability in per track income as with the ad-supported streaming services. RouteNote can get your music on itunes without you having to pay anything up front.