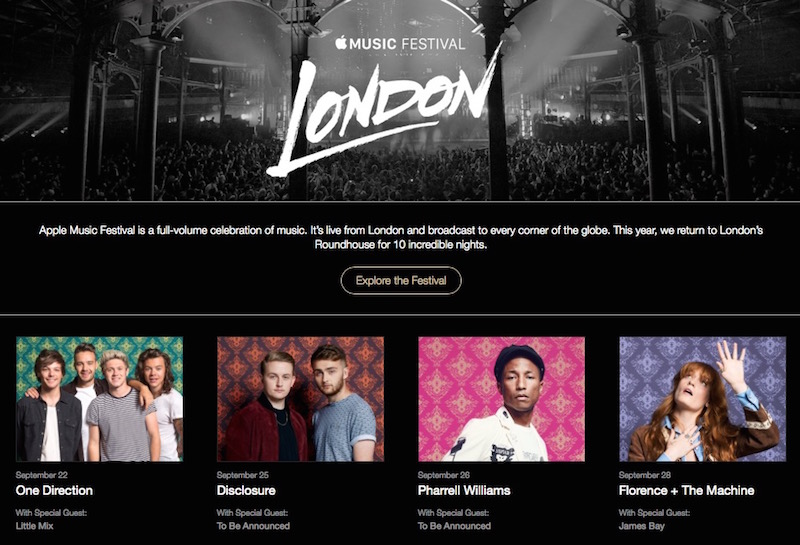 Yesterday Apple announced it’s lineup for their 2015 Apple Music Festival, a live festival that Apple plan to broadcast around the world from The Roundhouse in London.

The series of concerts will feature massive acts like Pharrell, One Direction, Disclosure, Florence + The Machine and more to come. As opposed to Apple’s festival last year, the iTunes Festival which featured 30 nights of concerts in September at The Roundhouse in London, Apple has scaled back for it’s revamped 2015 festival which will run across 10 nights from the 19th-28th of September.

Apple’s senior vice president of Internet Software and Services, Eddy Cue, said: “We wanted to do something really special for music fans this year. The Apple Music Festival is a greatest hits set of ten unbelievable nights featuring some of the best performers on the planet appearing live and interacting directly with their fans on Connect and Beats 1.”

All of the performances will be broadcast around the world for free available to view live and on-demand on Apple Music. The festival will also be covered on Beats 1, Apples new radio station for Apple Music, featuring backstage news and footage straight from the artists will be accessible on Apple Music Connect.

With only four headliners announced so far we can expect to hear the other artists coming to London for the Apple Music Festival over the coming weeks. Admission for all concerts is free however only residents in the UK can apply to win tickets and additional passes are being made available through media partner giveaways.